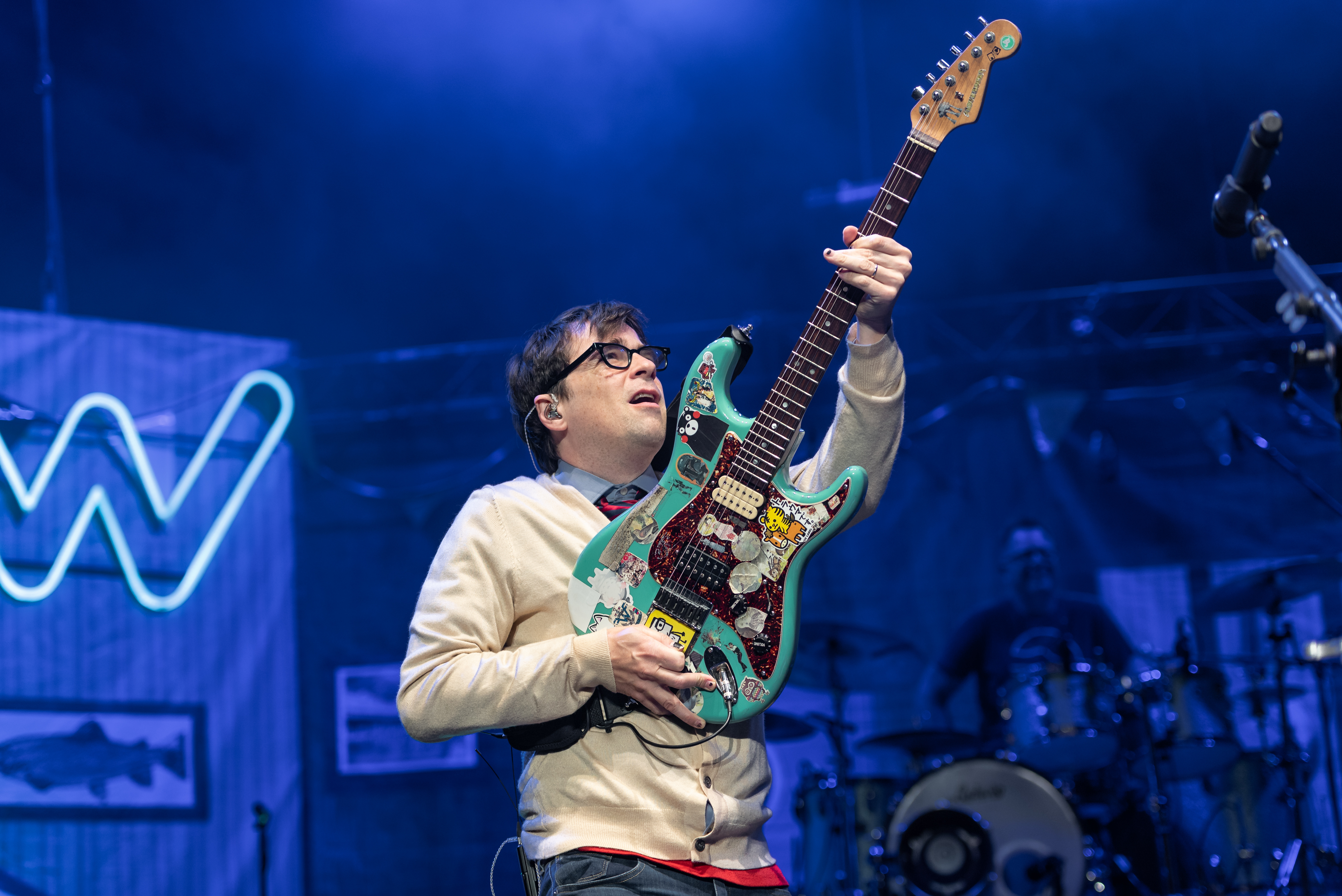 Two of the biggest 80’s and 90’s rock bands joined forces for a summer tour you’d be crazy to miss.  The Pixies and Weezer brought their huge rock show to Long Island’s famous, Jones Beach Amphitheater.

The show kicked off with Sleigh Bells, an electro-punk band featuring core members Alexis Krauss and Derek Miller, and touring guitarist Jason Boyer. This Brooklyn based band was handpicked to open the second leg of the summer tour.  Loud, crunchy, almost metal guitar riffs over hip-hop style beats with Alexis’ beautiful vocals and catchy hooks help Sleigh Bells stand out on a tour like this. Standing in front of stacks of Marshall guitar cabinets, both guitar players jumped around and bounced their heads without missing a beat. Alexis took full advantage of running around and jumping all over the stage, essentially whipping the crowd into a frenzy.

Kings of Alt-rock, The Pixies, were up next and not shy to leave the crowd with a

memorable experience. The Pixies performance proved exactly what has kept them relevant and important for three decades. Original members Black Francis on guitar and lead vocals, Joey Santiago on guitar, David Lovering on drums, and rounding out the lineup, Paz Lenchantin, bassist, formerly of A Perfect Circle has played with the band since 2014.  Each performance during this tour offers a different set list that pulls from their entire catalog.  Gratified, especially if you are a die-hard fan, is the feeling you are left with when they are finished for the night.  At this particular show, the set we were treated to included favorites such as “Monkey Gone To Heaven”, classics including “Where Is My Mind”, and the hard-driving Um Chagga Lagga from their latest record Head Carrier.  The Pixies had a modest but perfectly executed light show of strobes, smoke, and intense white lights. It’s no surprise they’ve had fans of and influenced people including but not limited to Kurt Cobain, David Bowie, Radiohead, and their current tourmates Weezer. If you appreciate great rock bands and haven’t had a chance yet, you need to do yourself a favor and clear your calendar to check out The Pixies.

Weezer was up next to give the crowd the rock show they waited all night to see.  Starting the set behind a black curtain, they were introduced to the screaming crowd by Al from Arnold’s Diner.  The Happy Days recreation of their iconic video from their 1994 debut song, “Buddy Holly”, was a fantastic way to kick it off.  Fans sang along as Weezer touched on albums from throughout their career, leaning heavily on the Blue Album and Pinkerton, much to the crowd’s delight. Highlights included: “My Name Is Jonas”, “The Sweater Song”, “Say it Ain’t So” complete with the main riff to “Paranoid” by Black Sabbath, which closed the show.  Weezer’s performance paid homage to famously celebrated musical influencers by playing covers of “Happy Together” by The Turtles that included a verse from “Longview” by Green Day, an acoustic cover of A-Ha’s “Take On Me” from a small stage in the middle of the venue, and their most recent hit cover, “Africa” by TOTO. Having seen Weezer in small clubs at the beginning of their career, to a night like this at a large outdoor venue on the water during a beautiful summer night, it was as nostalgic and exciting to watch them headline at my hometown venue with a big production, set, and costume changes as it was in the 90’s. Original members Rivers Cuomo, Brian Bell and Pat Wilson rocked a solid set with longtime bassist Scott Shriner to put on one of the more fun shows you could see this summer. As a Weezer fan, this show was impressive as ever.  If you haven’t bought your ticket for this tour yet, stop what you’re doing and purchase it now!

0 comments on “Weezer w/ The Pixies and Sleigh Bells”