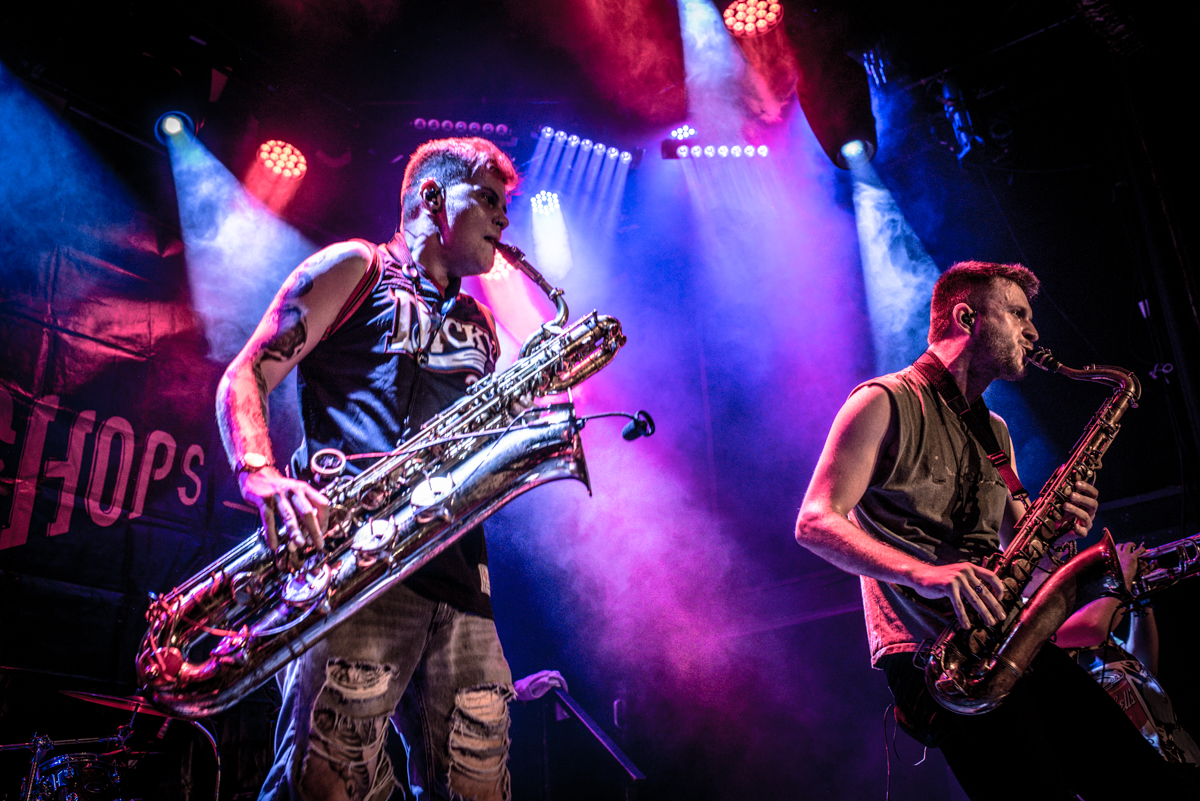 12 hours after leaving New York City’s Bowery Ballroom, I still have that tune in my head “Without you”, and I feel the need to jump around and dance. This is what a Lucky Chops brass band concert will do to you.

The get-up-and-go style and enthusiasm that this group of musicians put out on stage flows through you with every song, and stays with you for hours and hours afterwards. So it only took just a few toots of the horn before the crowd was in-sync with the band’s jumping, dancing and limitless excitement.

You might have seen these guys playing in the New York subways or on social media somewhere, but what you might not know is who they are. So you got the colorful Leo P on baritone saxophone, the fast-moving Josh Holcomb on trombone, the astoundingly soulful Daro Behroozi on tenor saxophone, the exultant Joshua Gawal on trumpet, the always beaming Raphael Buyo on sousaphone and making his debut on drums—Charles Sam IV.

When we saw the stage cleared after the opening act– removing every wire, cord and ground cover, we knew that they were preparing to let loose on the stage with their signature dancing while playing and that’s exactly what took place! In almost every song we had Leo’s fancy footwork, Josh’s fast-paced style of moving around as he performs— often times placing himself at the very edge of the stage tooting directly above the audience, Josh’s trombone slide jetting out far past the second row of the audience while leaning over the edge of the stage with condensation literally spitting out of his instrument right above our heads.

What has been common or traditional for most brass brands really doesn’t apply to these guys!  You can see this in the young faces in the crowd who are bouncing and dancing with jubilant exhilaration as if it they were in a dance club.  You can also sense how they are reformulating the brass band standard by the variety of different music they incorporate into their shows –from originals like “Connie” to old standards “Stand by Me” and then fan favorites “Problem” and “Coco”. Such uniqueness, paired with their endless pursuit of playing everywhere from subways to street corners, spreading their energy has proved fruitful with their first sold-out show at the legendary venue.

Throughout the evening each performer had an instrumental moment in the spotlight.  Highlights included Leo P on baritone sax and Daro

switching to a bass clarinet accompanied by Charles on the drums for an improvised piece they called “Junkyard”. Another definite highpoint was Buyo’s moment to shine during the brilliant track—“Buyo”.

As a treat to the band’s enormous social media following, Holcomb handed over his cell phone to a member of the audience and had him film a few songs as they were streamed live via Facebook. They’re still posted so you can see them, and you might also even see me in there somewhere!  Just another way they are innovating and using the tools that have helped them spread their eagerness for boundless live music.

I have seen firsthand that the pleasure of a Lucky Chops concert is more than just experiencing great music. It is the feeling of liveliness that you carry forward, but not from just the soulful blast of the horns, but also from the smiles

the impressive footwork of Leo P, and the dynamism of Josh as he leaps from each corner of the stage. They all give their very most in ensuring everyone is having an enjoyable and memorable time, one that easily and thankfully carries them through the days that follow.