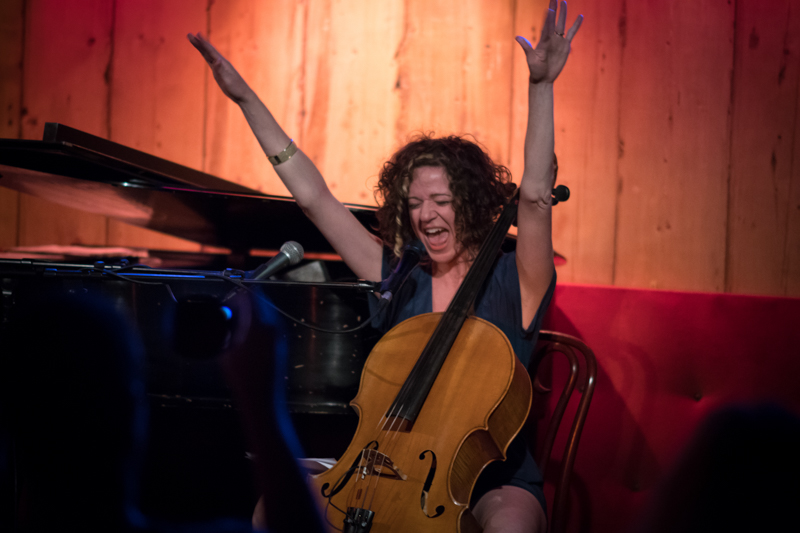 Erin and Her Cello

Coming from Stage 3 this past Friday night at the prominent Rockwood Music Hall, Erin and Her Cello took to the stage and gave their fans exactly what they have come to expect; a unique musical experience with a rare blend of comedy, true talent, a rockin’ cello, and ensemble that brought it!

Erin Hall and her finely tuned cello arrived with accomplished musicians that often headline on their own; Aya Kato on piano, Gabe Shuford on Nord Electro & percussion, Jacqueline Acevedo on percussion, Lars Jacobson on tenor saxophone, and Madison McFerrin/Adam Enright—backup vocals. This talented ensemble played perfectly to Hall’s endearing & bubbly personality. With a musical style falling under a vast umbrella, showcasing a mix of French Pop, Jazz/Funk, Blues, retro 50’s/60’s and Surf Rock, there was truly something for everyone.

Playing both crowd favorites and some new numbers, the band kicked off the show with the apropos “TGIF”, a soulful and funk-filled song that immediately grabbed the audience and got everyone moving.  “Burnin’ Up”, a distinctive tune that fits perfectly with the late summer climate and the drinks that were flowing. Following was “Write and Shop”—the moment when the band took the crowd on the most exhilarating, rapid carnival ride;

a fast-paced & fun track that also really highlighted the talents of Jacobson on sax.

Next up were two completely different genres of song. First, the charming “Petits Bisous”, the title track from their sophomore album, and a sweet piece of French art at its finest. Between the whistles provided in unison by Enright and McFerrin, Hall singing in French, it was an exceptional musical moment that was embraced in full. Then switching gears entirely and playing to the NY crowd, “Taxi” made you feel as if you were riding the streets of the Big Apple, with the exact kind of swagger New Yorkers are known for. Hall and the band took you with them in their musical cab ride and made one yearn to hit the gritty road and explore the city.

Hall (along with her curls that matched the scroll of her cello!) then had some signature fun with the audience during the solo portion of the show. Her contagious laugh, witty banter and quirky personality on full display, she grabbed the audience with “Pro” and “Cicada”. With only her delightful voice, naturally amazing cello talent and the assistance of some pretty cool loop effects, it was obvious that she was having a great time and gauging the reaction of her fans who were loving all of it.

Then bringing the band back to the stage, “Breakdancin’ Man” off of Petits Bisou allowed

Acevedo’s exceptional bucket work to shine! What seemed like another special ode to New York, the crowd was easily transported to a delightful subway ride with entertainment provided by dancing and solid beats reminiscent of the 80’s and 90’s.

Capping the night off was everyone’s favorite—“Sober”, the crowd-pleasing moment when Stage 3 was transformed into what felt like a grand sing-along at one’s beloved watering hole.
An excellent selection that completed an excellent performance!

Erin and Her Cello will take you on the journey
you’re looking for provided your enthusiasm matches theirs! They’ll be hitting Rockwood Music Hall again on Monday, October 24th and Wednesday, November 30th, so be sure to check them out and give yourself a true musical escape, laughter and a smile that will last:  http://www.erinandhercello.com/