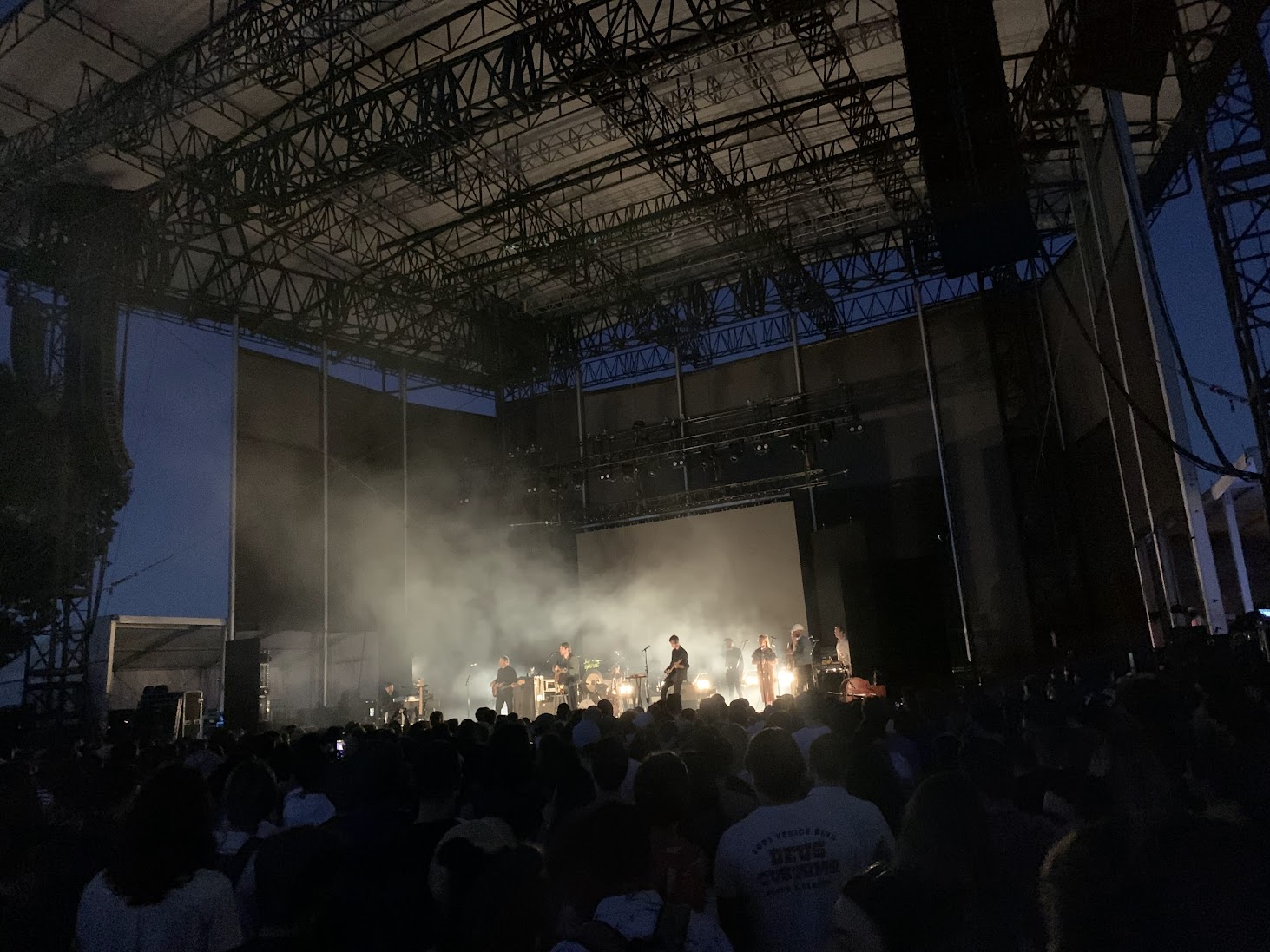 Standing in GA at Forest Hills Stadium in Queens, NY, the breeze was soothing, even chilly in moments, not unlike an August evening Upstate when summer starts to give, and we are reminded that seasons change. After a stretch of blistering hot days in New York, the humidity broke, and the city seemed to sigh in relief. A reminiscent autumn chill is fitting for a Fleet Foxes concert, especially on the closing night of the North American tour supporting the well-received Shore, the album whose release coincided with the 2020 autumnal equinox. A few seasons delayed, but here we were to celebrate, to sigh with a sense of relief.

I was struck initially by how empty the stadium seemed, even up to the moment that Robin Pecknold and band – a 9 piece ensemble including New York brass quartet The Westerlies – walked on stage. In the flurry of post-lock down concert hype I expected sold-out energy, but looking back, that vibe would have been too much for a show opened with “Wading in Waist-High Water,” featuring Shore collaborator and tour opener Uwade on vocals. By “Can I Believe You,” the crowd consolidated, with those on the outskirts filling into seats with better sight lines, primed to sing along to indie classics like “He Doesn’t Know Why” and “White Winter Hymnal.”

In terms of music, this was the show I was expecting. Pecknold’s folky confessional songwriting style is fully recognized by the band’s vocal harmony and orchestration. Being in front of a stage filled with people playing actual instruments still feels special, no doubt fueled partially by the absence of this spectacle in the last few years. But I could not help but notice how the staging felt small – the video screen, the lighting elements, the band’s physical footprint onstage. The most impressive moments of the night were a string of acoustic numbers (“Blue Spotted Tail,” “If You Need To, Keep Time on Me”) featuring only Robin and guitar. When Robin stopped briefly during a Judee Sill cover of the “The Kiss” to check on a distressed audience member, I wondered if a smaller, indoor show would have translated better, or helped bridge my personal gap between expectation and reality.

But navigating the muddy in-between of expectation and reality is exactly where Fleet Foxes’ music is best suited, and how they have come to run in the same circles as Bon Iver, Aaron Dessner, and famously, Post Malone. Watching the band cover The Strokes’ “Under Control” while dressed in custom tennis gear felt like a uniquely New York moment. I realized then that any lingering disappointment came only from expecting the experience to match the way Shore made me feel – expansive, genuine, alive – when, this was a concert in a tennis stadium, on a beautiful Saturday in August, to be enjoyed and appreciated exactly as it was.

Wading in Waist-high Water (with Uwade)

Can I Believe You

He Doesn’t Know Why

If You Need To, Keep Time on Me (Robin Pecknold Solo)

A Long Way Past the Past

Drops in the River

For a Week or Two (with Uwade)

Under Control (The Strokes cover) (with Uwade)