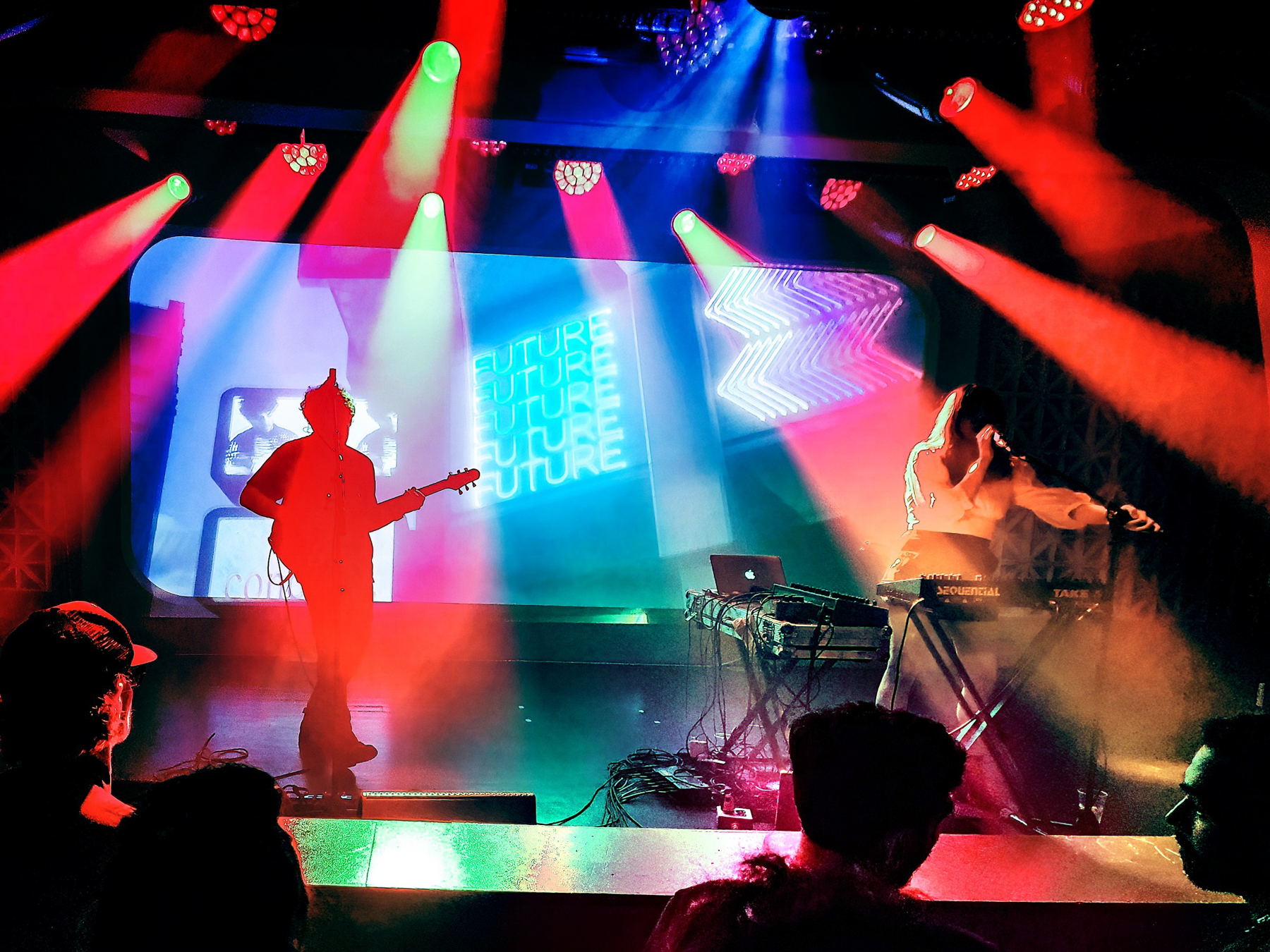 Listening to their records doesn’t prepare you to see The KVB live. They surprise you, in a good way. The understated production on their records downplays the absolute wall of sound that the group produces.

Front man Nicholas Wood and synthesizer magician Kat Day push a lot of air on their set, something that you might not expect if you’ve only listened to their albums. Their music is surprisingly aggressive, something you’d be forgiven for missing if you’re only a casual listener.

Wood’s sometimes shy feeling contrast with the growling pads that that Day lays down and when they play live there is a sort of magic in between them that, while present on the records, bursts to life on stage..

A constant driving beat pushes out of their drum machine driving every song start to finish and inspiring some sympathetic movement from the crowd at Brooklyn Made.

Speaking of which, The KVB seems to maintain a relatively small but healthy and dedicated fanbase. Everyone I talked to at the show knew them well, and they seemed one of everyone’s top bands, which is something to be said for a somewhat obscure group playing far from their home in England.

In fact, the fans, around one hundred of them, were loud enough when the group took the stage you could barely hear Ms. Day introduce the band. The cheers were quickly swallowed when the synth spun to life and the guitar began to chug along.

If there was one complaint about the sound quality, it would be that the vocals were sometimes subsumed in the mix, lost a little bit in an enveloping sea of reverb.

The group spent a good while in their latest record, Unity, where they played “Unité” and “Unbound” among others. They of course played “Always Then,” and “Never Enough,” two of their biggest singles.

Again, listening to “Always Then” or “Never Enough” as a recording you might get the idea that they are sort of mellow tunes, but live they are anything but. They we’re noisy ragers and should be respected as such.

In spite of the driving beats behind the songs the crowd was often reluctant to do more than sway, which is perhaps the phenomenon that earned The KVB the label shoegaze music.

One would be mistaken to neglect the visual aspect of the performance, created by Kat Day. They included a variety of themes, perhaps most often bringing the crowd into the spare psychedelic landscapes of Unity and the futuristic skylines of their previous recording projects.

The venue was a good match for the band. The dark, red-lit stage fit the dark aesthetic of their recordings and made the visual component more prominent. Unless it was your only chance, I would caution against seeing the band at a daytime show lest you miss the visual projections.

Al Lover and Public Memory opened to a good crowd. They’re both well worth a listen if you’re the sort of person who would find themself at The KVB.

Al Lover hit downtempo industrial house, or a sort, and Public Memory delved into a dark and strange world of crooning over synthetic sounds.

All in all, if you can catch The KVB on tour this summer I would recommend that you do.

0 comments on “The KVB at Brooklyn Made”