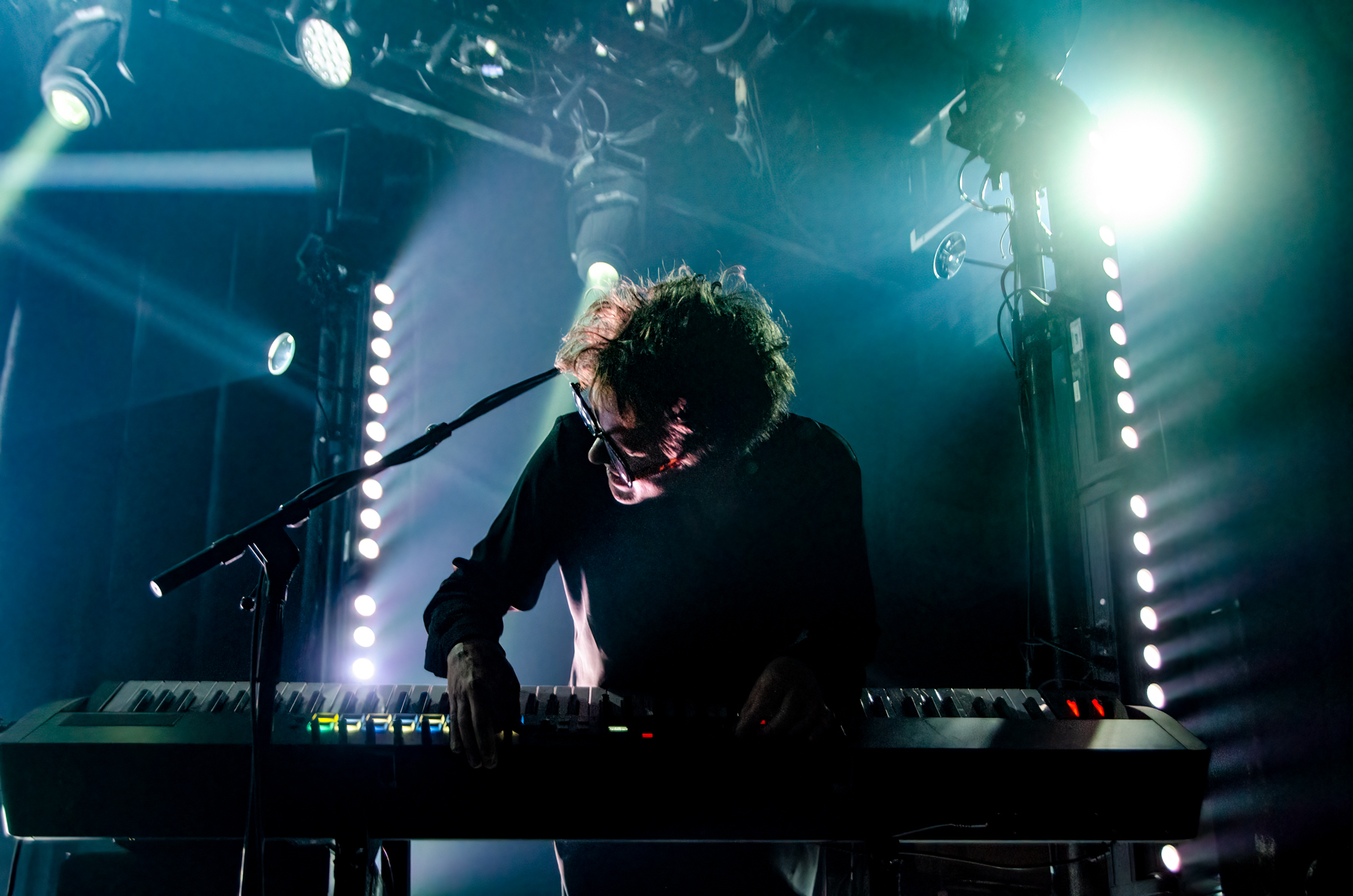 “If you don’t feel different leaving this show, you are wrong,” said a man, leaning the entire weight of his slender frame on the stair railing at the exit of Elsewhere. While talking to his group of friends that were congesting the only way out of the Son Lux show.

I couldn’t have agreed with him more. With the attention to detail, the emotional bearing performances, the guest singers, and the high production value, the Son Lux show was something else. Euphoric, therapeutic, and engrossing are some of the words that come to mind, though they don’t do justice to describe the entirety of what I, and many other patrons, were feeling.

Son Lux, which makes songs with fast beats and heavily electronic work, had a crowd of people engaged in listening. Instead of the dancing and hoopla I expected from these songs, people were intently staring at the stage, fully engrossed in the actions of singer and keyboardist Ryan Lott, guitarist Rafiq Bhatia, and drummer Ian Chang. The group humbly took the stage and offered words of wisdom parading as lyrics throughout the whole set.

Each member of the band was dressed like the coolest people you would see at an art gallery viewing. Lott was wearing large square-rimmed glasses with wavy hair quaffed up. Bhatia wore a plain black tee and circle framed glasses. Chang wore a black long sleeve, bleached shaggy hair, and some of the most entertaining expressions while banging on the drums.

In the pitch-black room, small beams of light begin to illuminate the musicians on stage as they begin the song “Vacancy” with their guest Nina Moffitt joining them partway through the song. “Be careful with yourself, be honest with me” she echoes in a strong and lovely voice to the room, each person giving their undivided attention.

“Thank you so much, Brooklyn. This band was born in Brooklyn.” Lott said before the band continued the rhapsody of music, including their songs “Only”, “Prophecy”, “Honesty”, and “Plans We Made”. It is incredible how three people can fill an entire near black room with so many different celestial songs with cinematic flair purely through the noises made by their instruments and their voiced.

“Thank you so much.” Lott continued.” Every time we play live, we like to reinvent things. One of the remarks I’ll repeat from earlier today, every time we come back to New York always feels familiar but reinvented. For those who have come, and left, and come back, you might know this feeling but it’s weird. It’s like it is home. It’s always home, but it’s always new. Really, we love music like that. It’s home, but it’s always new. This was the one song that is not a new song, it’s an old song in a new way, and just like New York, it’s always there to be your friend, and there to fuck with you. This song is called “Easy.”

While playing their most popular song, the band stayed true to the original while giving it their new flair. Chang’s face changed from pursed lips to a gapping mouth, looking as if he was in a deep into a conversation with his drum set that perhaps no one should have heard, but we were all lucky enough to. All tensions were beat out from the drumsticks to the barrels of the drum.

The next song they played was Last Light with their guest Holland Andrews. Andrews had an incredible voice that seemed as if it was plucked from the eeriest of ethers. Andrews was able to belt in a full gorgeous howl with the music. As if, meant to be a siren, leering people into the depths of the unknown behind the fog.

“I needed that” someone says in the elated audience after the storm on stage seemed to calm.

As Andrews left the stage, Lott said. “I guess I’m supposed to sing again now.” Over the speakers was a start-up chime for a computer saying “boopboopboop.” Bhatia laughs and looks over to his bandmates. “The sub woofers vibrated the stage so hard that it reset my computer.” After a small pause to let the machine come back alive, Son Lux played “Live Another Life”.

Lyrically this band delivers small sentiments and felicitous phrases that bare true to all who listen. Small kernels sprinkled throughout the song here and there make it feel as if you aren’t hearing just a musician, but you are hearing the words of a sage. Live makes it feel even more raw and real, reminding you of the times in the past when you have been scared, hurt, or thrilled. Son Lux can do the thing all musicians attain to do by delivering ubiquitous sentiments in music. They haven’t sacrificed their art to be poppy or catchy, like most music does when being relatable, but elevate it to the state of artform; it makes you feel something.

“This is the part where we pretend to be done, but we aren’t going to do that. We are just going to keep going.”

A man a few rows back from the stage calls out in a thick eastern European accent “Sing a song for my girlfriend. It’s my favorite song. Please, for God’s sake!”

Lott weighs this request. “What song?”

“Oh Geez! That is such a deep cut. I’ve literally never performed that song. I sang it one into a microphone. I feel like such a disappointment!  Is this a thing where this guy shows up with this accent for every show? Asks for some random deep cut that’s impossible to do. I’m so sorry. Nothing against you or your ‘girlfriend…’ I’m just fucking with you. No, it totally means a lot. I don’t mean to make fun. I totally appreciate the enthusiasm. I kind of wish I could play that song.

Okay, we got two more songs. Here we go.” The band leads into their song “A Different Kind Of Love” with the same delicacy and pleas as you would hear from a sordid lover.

“It’s been such a pleasure. We want to thank our special guests again, Nina Moffitt, Holland Andrews, and all of you. This one might be a little familiar if you have seen the movie Everything Everywhere All at Once. This is the first piece of music we wrote for the movie. It became a version of the theme. It’s always going to have a special place in our heart. This one is called Unbind.”

This movie has become such a phenomenon online. I haven’t met a single person who has seen it and said that they cried and laugh and laughed while they cried. Though Son Lux is not small, I hope the success of this venture only build their base and allows them to continue exploring and expanding their music into the new realms that people can only visit by listening to their music.

0 comments on “Son Lux at Elsewhere”