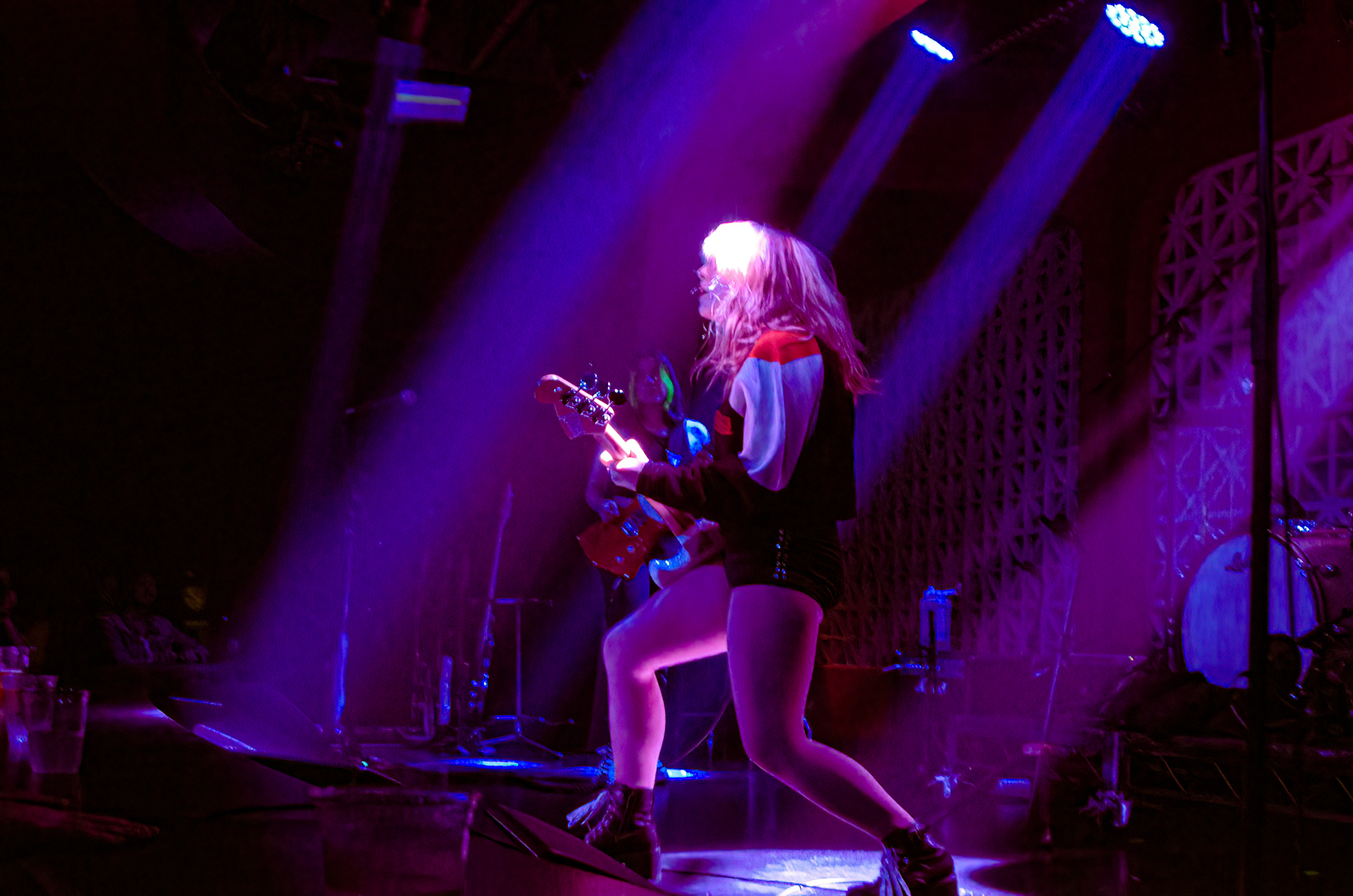 Skating Polly’s show begins at Brooklyn Made, a small but palatial venue. Kurtis Mayo sets up his drums, taking time before the show starts to shake hands at the front of the stage with fans while his sisters are checking their instruments. After thoroughly looking at each instrument, the three duck away behind the stage, and the lights go dark for a few minutes.

Skating Polly starts immediately, with loud guitars and face passed drums at full force, rumbling out “Queen for a Day.” Kelli Mayo is full of energy, kicking at all the right points, and dancing whenever she has a pause in singing, all while keeping her hands working on her bass. Peyton Bighorse keeps composed while strumming out notes flawlessly and adding background vocals that any classically trained singer would be impressed by. The punk accouterments are present at this show, seen in the wild hair flips, foot kicks, and melodic screaming while bashing out tune after tune. The days of practicing in the garage are over but have left the mark of an original microcosm of self-expression in a group that has quite literally grown together.

You can tell that these three siblings have spent many hours finding their voice as a collective and using it to express their teenage emotions for the past decade. Their lyrics are relatable and catchy, executed like a guillotine over the amps to the audience, cutting their way through to the crowd and sticking themselves in your head for however long you can stand it. Each song is full of force and fun. Heads are banging, eyes are rolling, and it is impossible to keep yourself from yelling along with the songs.

Peyton, who really has a lush voice, starts the song Louder in Outer Space. “Can you hear you hear that harmony? I can hear it in my sleep. I can hear it even louder in Outerspace,” vibrates across the room. It’s upbeat and gets the crowd dancing during the breakdown.

When they begin “Little Girl Blue and The Battle Envy,” the crowd sings word for word along with the musicians, knowing the lyrics like the back of their hands that is now reaching towards the ceiling.

They play a new song, The Hickey King of Little League, which is cacophonous and exemplifies Peyton’s incredible vocal range. “TST TST TST TST” calls over the speakers, making for harmony in the mayhem.

This leads to their endearingly earnest song “Pretective Boy.” Kelli strums slowly but pronounces each syllable with determination and distinction as she professes that the lyrics do have meaning and she will prove it. Each member of the crowd believes her and gives back a tumult of excited cheers and singing along. Few in the audience are singing in key, but it’s still an “A” for “Affort,” as they are all blatantly excited and professing that they have felt exactly the feeling this song was able to put into words.

As the show continues, the energy in the crowd rises, and Kelli matches it, jumping, kicking, and moving across the stage. She has the swank of someone who was born to be on stage left, in front of the speakers, divulging into her deepest human experiences of love, rock, and rejection.

0 comments on “Skating Polly at Brooklyn Made”