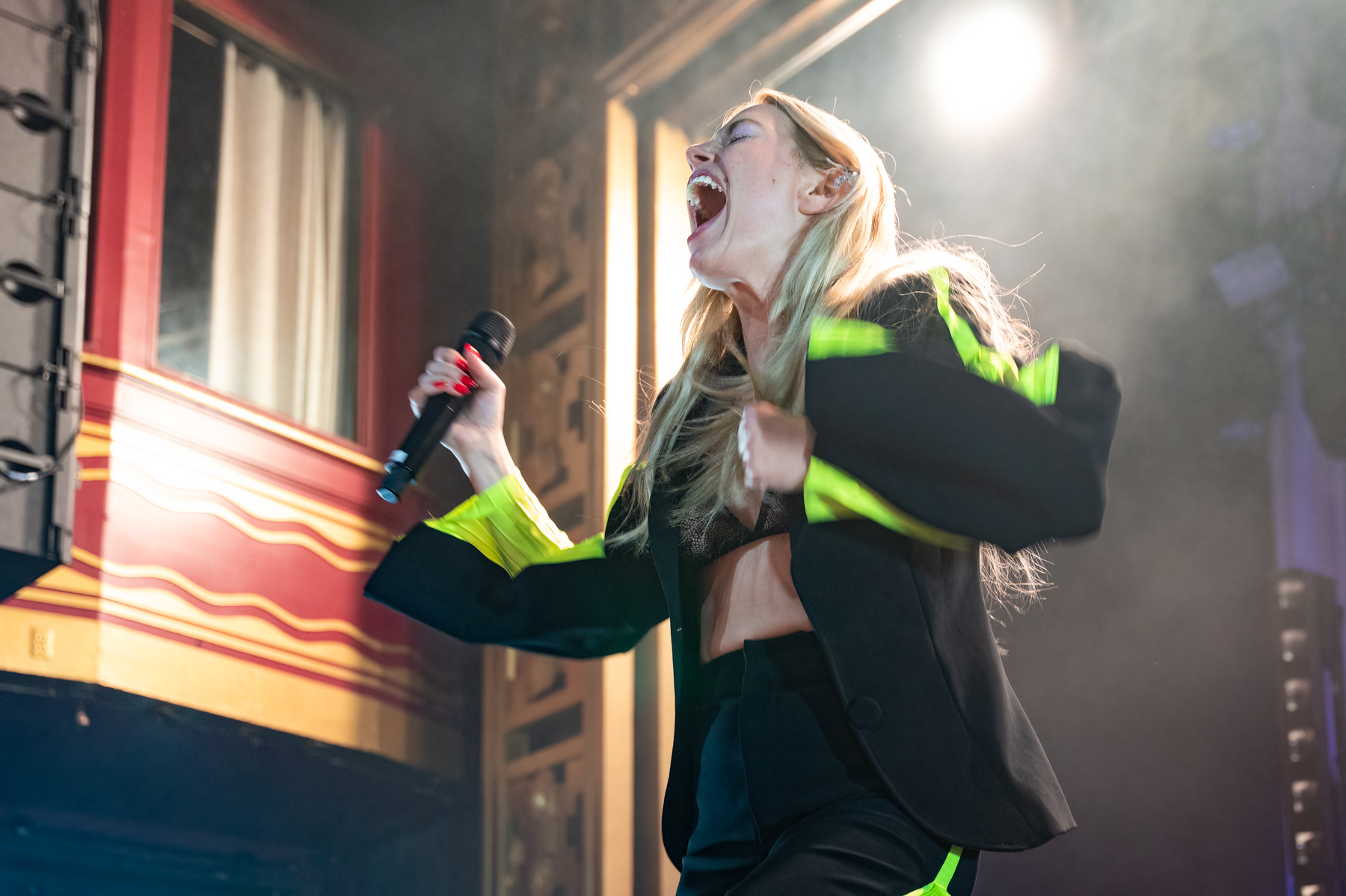 On a cool spring evening in April a lengthy cue of young jacketless kids stood shivering to enter Webster Hall.  The cue was stretched around the block up to 12th Street on 3rd Ave.  As the young kids rounded 11th Street the home stretch of the wait, arms all raised with cell phone in hand to photograph the famous Webster Hall’s Marque with the four letters that there all came to see. A-S-H-E!

Ashlyn Rae Willson also known as Ashe could easily be playing much bigger venues for her The Fault Line Tour, but instead chooses to do multiple nights at the Websters Hall Grand Ballroom giving her fans a more intimate connection to her and her music.

The Ballroom filled to capacity very early as fans were keen to stake out the best vantage position to show their signs and get a good view of the performance. Keeping themselves busy singing in unison to pre-show tunes while waiting.  This was a remarkable performance as it seemed to be a 500-person choir singing songs from Abba to Harry Styles, no matter the decade they knew all the words.  The audience rocked the house before the show even began.

Soon thereafter the black sheets separating the fans and the set were dropped and Ashe appeared beneath a glowing arch. Side lit her long blonde cascading hair wearing and the flowing neon yellow trim on her black suit.  Only Ashe can be shirtless and shoeless and still look elegantly stylish.   Her presence was met with the roar of the impatient crowd.

The first song “Me Without You” began as she greeted the crowd with her hit song.  A song about a new start for the start of a new show.  I feel like the first line of the song almost describes the venue itself “Red velvet wallpaper stained by the cigarette smoke”. That’s how I remember Webster Hall in the 1990’s.

The band follows up with a most connectable song “I’m Fine” so much so that most of the fans sing it with her. One of the reasons for her impressive rise in success is songs like this that everyone can relate to.  Hiding one’s feelings from others by saying you are fine just seeming to be easier sometimes.

The energy of Ashe performance sees her gliding back and forth across the stage, her nimble movements are dance like as she reaches every space to make eye contact and smile with as many fans as possible. You can see the happiness in her eyes and hear it in her voice, so truly genuine.

Every number performed met with equal enthusiasm from the facing crowd.  When she got to her cover of Queen’s “Someone to Love” passion from the audience reached the new unheard-of excitement.  And if that was not captivating enough, she sprung a new unheard song at the fan base.  Something for more to look forward to in the future.

An amazing show even before the final two anthems we performed, “Till Forever Fills Apart” and “Moral of the Story.” To close out the show.  It is an understatement to say the crowd went wild, noise levels and excitement met new heights, the assemble of fans began singing and moving in unity as the night reached it climax.

Ashe is a authentic superstar with a sunny future and has some of the great supporters a megastar could love.  We look forward to seeing so much more of her.

0 comments on “Ashe at Webster Hall”