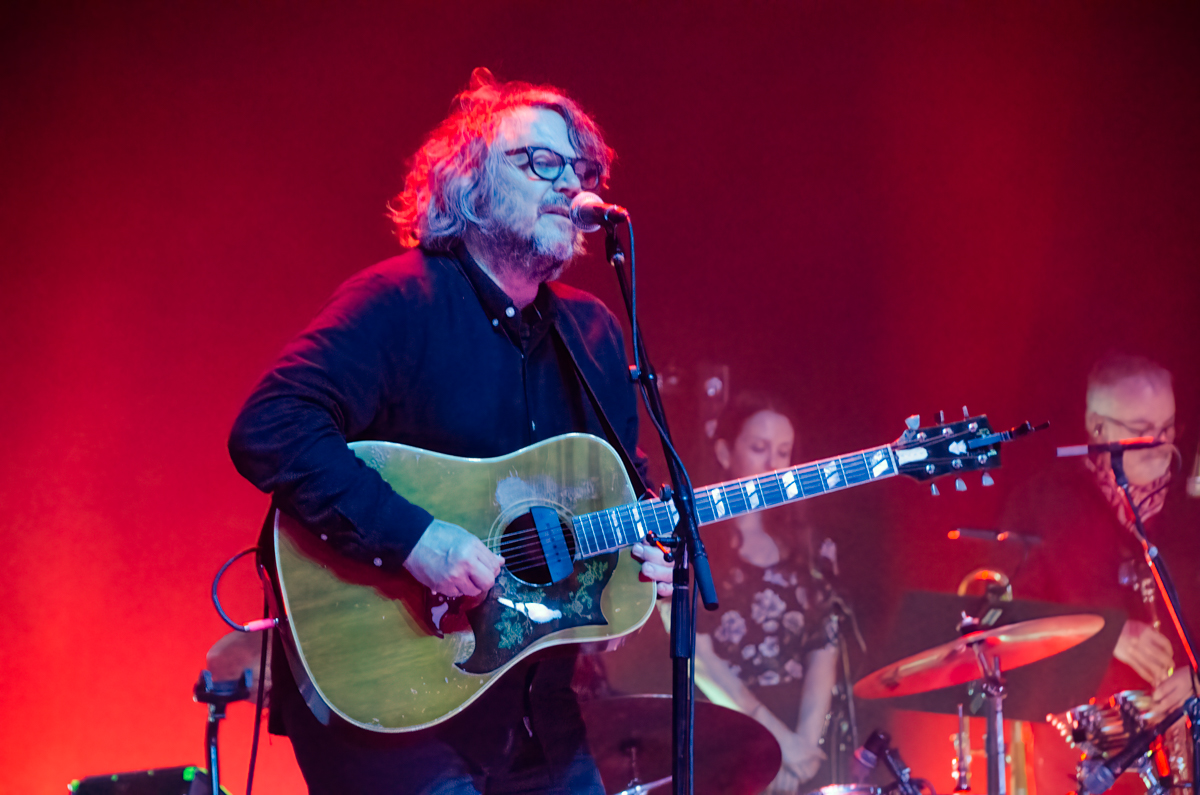 Jeff Tweedy stands at a vintage radio player on the corner of the stage. He flips a switch, and overhead we hear a static call. Over and over again, the title of Wilco’s defining album crackles across the airwaves at United Palace Theatre in Washington Heights. Meanwhile, Jeff ducks back behind the towering red velvet curtains on stage. The radio cuts out, and the curtains part to reveal the band scattered across the stage, leaving plenty of room for the music to flow forward and the lyrics to linger.

The night is a lovely celebration of their album Yankee Hotel Foxtrot, now celebrating its 20th anniversary. Wilco opens the show alongside the night’s opener, the Aizuri Quartet. “Getting to play with them… it’s not an accident.” Jeff later tells us.

Jeff performs in a rather understated manner, letting the lyrics and music speak for themself. He is reserved but confident and demands the attention of the room as he delivers the lyrics. Wilco pulled out all the stops for the live instrumentation of such a highly produced album. The band has supplied all the whirring, buzzing, and clashes that you would find on the studio version, as well as a few extras thanks to the live brass and orchestra section behind the band.

The song ends, and a man emerges from off stage to hand Jeff a new guitar. This happens at nearly every song’s ending, allowing the concert to flow largely without breaks, emulating the album just as you might listen to it through your own speakers.

Each member is playing their part meticulously, giving the songs their full attention. It is a pure performance devoted entirely to the acclaimed album Yankee Hotel Foxtrot. When Jeff looks into the crowd, his eyes seem to be searching. It isn’t clear if it is for a certain memory, a certain feeling, or perhaps just a stage queue. Whatever it is, it adds sincerity to his lyrics, which frequently are full of very human moments.

He shows parts of the ubiquitous longing to make oneself the best, the heavy and battered parts of oneself that we all wish we could shed and leave in the past, and the search to find the other half, the solve-all-problems person that will make you whole. In a theater full of velvet-lined seats, the audience stands to applaud, dance, and simply enjoy the world that Wilco has created for the night.

“I’ve reservations about so many things, but not about you,” are the last lyrics sung before the band bows and exits. The entire crowd gives a two-minute standing ovation to the empty stage, now littered with amps and the instruments that ushered them through the night.

Soon after the metronome of clapping, the band returns to an uproar of applause. “Thank you so much for being a part of that.” Jeff begins, taken back by the praises being sung. “That is just so sweet, thank you. We had some help; you may have noticed. I won’t go through the whole thing I said last night, but okay, I’ll tell you this much…”

“Thank you to the Aizuri Quartet. I’ve been wanting to do something to present these shows that reflected how we were feeling at the time we were making this record, and a lot of what Aizuri Quartet does is the type of beauty and creativity, and inspiration that we were striving for and that is what it represents to us. It is so exciting.”

Each member gets their own moment in the spotlight, getting woops and cheers from the crowd as Jeff introduces them and celebrates how important they were to this whole experience. He waits until the end to announce their drummer, Glenn Kotche.

“We want to keep in the spirit of this record, we are trying to do songs that were meaningful to us and related to us in this record somehow. Here is a song by Bill Fay that we learned sometime around this record.” The encore begins with the song ‘Be Not So Fearful.’ The band and the quartet balance each other and cover the song with a lot of emotional depth and a great reverence for the song.

The encore continues long into the night. Next up: ‘Pieholden Suite’ and ‘Cars Can’t Escape,’ which leads to a brief salsa-style interlude into ‘A Magazine Called Sunset.’ Then is ‘Humming Bird,’ and before playing the next song Jeff says “This is maybe the deepest cut of all time. It should have been a hit. This is one of the songs we sent to Warner Brothers Records, and they said ‘It gets worse every time. Every time you send something new, it gets worse.’” ‘The Good Part’ begins.

Jeff jokes that this is the good part. “Isn’t it?” The band plays ‘I Got You (At the End of the Century)’ and then closes the set honoring their LP (damned be to Warner Brothers) with ‘Outtasite (Outta Mind).’

“I know where I’ll be tonight, alright. Outta mind, outta site,” he sings. The night ends as each member who crafted an album, still influential 20 years later, takes their bow and leaves the stage one last time.