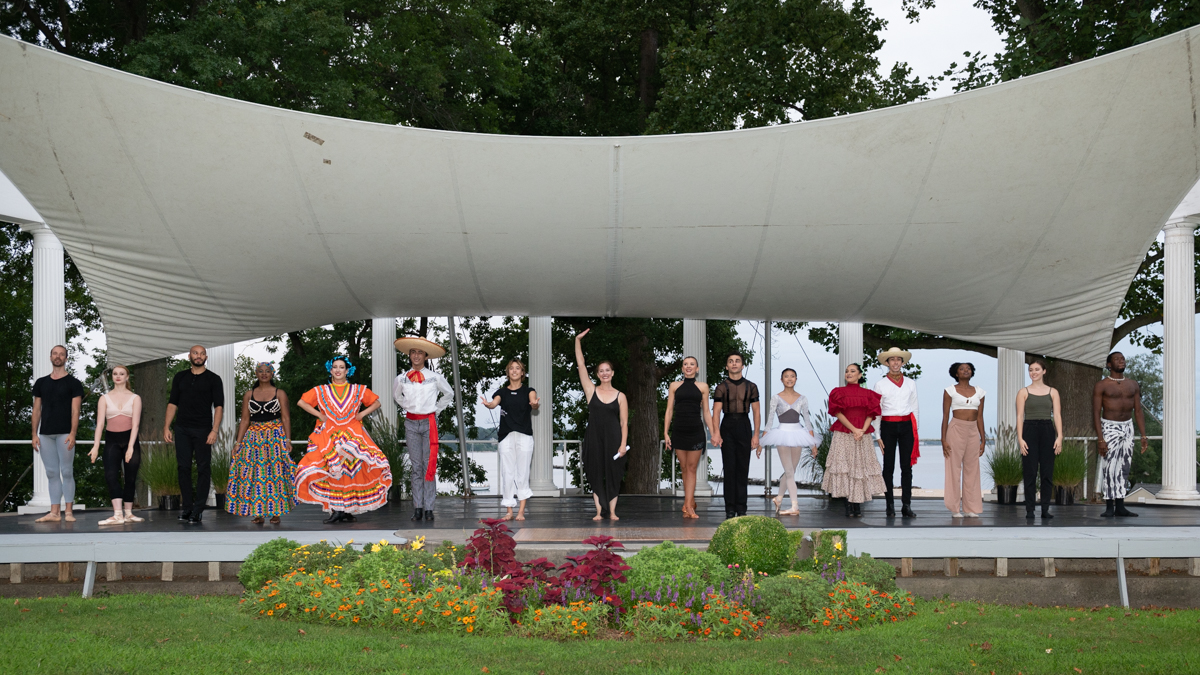 The Tri-State area was treated to a free Dance Festival thanks to MOVING ON, Glen Cove’s premiere live arts and contemporary dance company.  Displayed in the Morgan Memorial Park stage, with a spectacular backdrop of the Long Island Sounds harbor dancers from around the country were assembled by Moving On’s director Nicole Loizides Albruzzese.

The evening started out with a ballet performance “Change of Heart”, featuring New York City Ballet’s own Ask la Cour together with Graceanne Pierce.  Choreographed by Ask la Cour himself the dance was a beautiful reflection of its title.

“Paradoxical Form”: Da’ Von Doane followed with a solo dance which included poem verse choreographed by the dancer himself.  Striking and powerful Da’Von routine wove together mind, body and spirit, transcending you to a high level of being.

“Nebula”:  As well as being the director and producer of the event Albruzzese herself performed a beautiful flowing dance dressed in a white dress that sailed through the salty waters breeze and carried her across the stage as if she was a flower dancing in the wind.

“Bristlecone”: Taking front center stage for a beating performance was Tap dancing John Manzari who had every eye in the audience focused on his quick moving feet has they seemed to be airborne with striking taps providing rhythm to your hears and eyes.

“Alive” Choregraphed and performed by Erin O’Leary who is currently studying Dance at local LIU Post showed that she is more professional dancer than student.  Covering the full stage with her dance was an impressive feat for a solo artist and she did it with such splendor.

“Kindred Components” Fritzlyn Hector’s performance caught everyone’s imagination as she hid on center staged covered with colorful attire that flowed into her dance.  While some infused sounds with movement Fritzlyn instills vibrant visuals with her dance as she awakes from her cocoon into dance.  With slow movements and the stomping of her feet to maintain the rhythm which was then accentuated by the dazzling colors.  She is a storyteller with her every faction and sequence of dance.

“Unfastening” Melissa Norman probably the most well-versed dancer of the night was able to showcase a furry of styles moving from contemporary dance to hip hop into jazz and even ballet.  Her solo performance choreographed by Lauren Hiraldo was such a convincing performance and at the same time everlastingly beautiful.

“La Madrugada” “Dedos Agiles” & “Jarabe Tapatio” Performed by Ballet Nepantla which included Francesca Iannelli and Maricarmen Betancourt in full female Folkorico costume and Erick Perales and Jorge Naranjo in the traditional Spanish charro suits.  The colors of the outfits became a blur as the performers twirled and danced around the stage.  Their syncopated movements to the lively music set the beat and dance becomes music.  Twirling waves of colorful fanned out skirts as the dancers open their hearts, mind and spirit push through the joy of the dance.

“Strapped” My favorite performance of the evening, performed by Leah Abbott a

contemporary dancer preformed is the coolest outfit of the night, a straight jacket.  The wardrobe designed to prevent movement and dance placed limits which Abbott has to redefine dance in a way that works around the limitations of her costume.  So brilliant and she does it with excitement and conviction.

“Lilac Fairy” Choreographed by Balachine to the music of Tchaikovsky, 16-year-old Anna Tang gave a ballet performance worthy of the top ballet companies.  Graceful and elegant, from the moment of her first relevé to her expertly executed pirouette Tang was flawless and breath taking.

“Latin Medley” This was like the ending to the movie Dirty Dancing!  Built up as the closing encore event and it was a bit of dirty ball room dancing excitement.  Stars Denys Drozdyuk and Antonina Skobina know aka DNA have been perfecting their dance together since 2006 dazzled the masses gathered with incredible dance steps that they make look so stress-free and natural but is something that has taken eons to accomplish.    It left everyone wanting more, so I would say a repeat performance next year will most likely please the crowd.