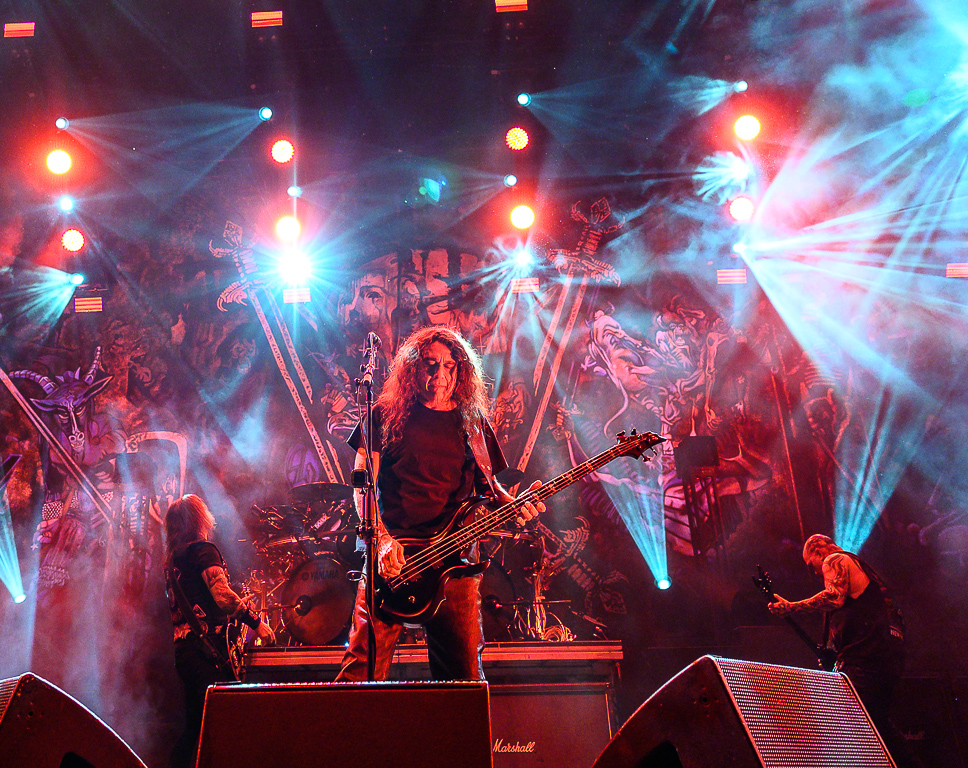 Metal fans came out in droves to bid farewell to the mighty Slayer for their last New York City appearance and what better place to do it than the “Worlds Most Famous Arena”, Madison Square Garden. Their almost forty year career ends a few short weeks from now, back where it all began, in Los Angeles. After many impressive lineups throughout several legs of the tour,  the final lineup was one to behold as it did not disappoint The Gardens’s sold out crowd.

First up, Philip Anselmo and The Illegals performing a set of Pantera classics. Phil dedicated the set to the late brothers, his former band mates Dimebag Darrell and Vinnie Paul before they played the first note. Closing this incredible setlist of classics to a blistering crowd scream along, was “Walk”.  After an on stage band photo, Phil had the crowd join him as he sang, “And she’s buying a stairway to heaven”.  A thoughtful tip of his cap to Led Zeppelin, who played a significant role in making The Garden a special place for rock music.

Ministry took the stage next to bring a dose of heavy industrial music to the evening.

Along with a cover of the Black Sabbath classic “Supernaut”, the majority of their set came from albums “The Land Of Rape And Honey” and “Psalm 69”

The final support act was the legendary Bay Area funk/prog rock/metal band Primus. As a trio and admittedly the strangest band on the bill, they were also the only band on this tour with all original members (Les Claypool, Larry LaLonde, and Tim “Herb” Alexander).  Primus was hand picked and personally asked by Slayer to help them close out their career.  Bassist and singer, Les Claypool shared with fans that  many bands have asked Primus to open for them but they usually decline as Primus can headline their own shows.  However, the moment Slayer asked, they didn’t need to give it a second thought before agreeing. He also joked that a good time to go pick up a Slayer shirt would be during their set, as  the lines were likely to be shorter then. Regardless of Primus’ sound being wildly different in comparison  to other bands on this tour, they didn’t hold back and rocked just as hard as the bands who played before them. With their odd time signatures and slap bass, they busted out the crowd favorites, “My Name is Mud”, “Jerry was a racecar driver”, and a cover of “Cygnus X-1” by Rush. Les Claypool even went as far as changing his lyrics from “Where you going city boy” to “Where you going Slayer boy” during “My Name is Mud”.

Finally, the moment twenty thousand metal fans had been waiting for.  One of the most legendary and iconic metal bands of all time, SLAYER!!!  Projections of rotating upside down crosses and giant Slayer logos were cast onto a black curtain before it dropped and as it fell to the ground, the band launched right into “Repentless”, and their final show in New York City was underway. As one of the pioneers of the metal genre, Slayer  gave it their all, every second of the ninety minute show. A legion of devoted screaming, head banging  fans gave their heroes the proper metal send off Slayer deserved and earned for their nearly four decades of dedication to their music, performances, and fans.  Flying through songs at breakneck speed they hit all of their classics this crowd was there to hear, on a stage literally bursting into flames as pyrotechnics shot off behind and in front of the band nonstop as the stage bathed in red and blue lights and rolling smoke. Original members Kerry King on guitar and Tom Araya on vocals and bass were joined by longtime members guitarist Gary Holt and drummer Paul Bostaph. Singer Tom Araya only addressed the crowd a few times to give his sincere ‘thank you’ to their devoted fans, some of whom, have been attending performances throughout their almost forty year career. A particularly lighthearted and funny moment was when Kerry King began to play the intro to “When The Stillness Comes”.  After three failed attempts at the dark arpeggio intro, he threw his arms in the air,  waved it off, and jumped into the main riff continuing on, getting a chuckle from the band and crowd. With songs about demons, war, racism, murder and religion, the band has stayed true to the thrash metal sound they helped create, for their whole career. Songs like “War Ensemble”, “Seasons in the Abyss”,  “South of Heaven”, “ Angel of Death” and “Raining Blood”, are songs that help define a genre, as well as showcase and prove the importance of their contribution to metal. We wait to see what lies ahead for these pioneers of metal. But for now, this night ended with an incredibly satisfied crowd who certainly offered an amazing send off to the much loved, one and only, SLAYER!!!!

0 comments on “Slayer at MSG”