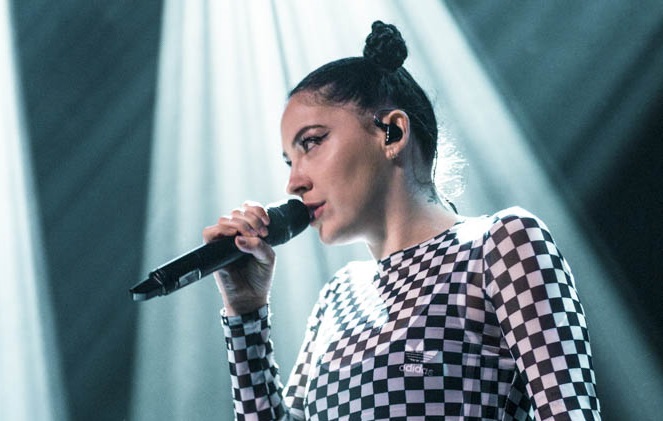 To be entirely honest, I had never really listened to any of Bishop Briggs’ music until just one day before her show when I found out, to my surprise, that I would be shooting it. (Thanks, Nadia the publicist/press person). So, to maximize my Bishop Briggs experience, I listened to only her for that entire day. My first impression was that her music is the type you would find playing at a large retail store like H&M or Urban Outfitters. By that, I mean her music is likable to the general public. It is fresh but in a familiar sort of way. Don’t get me wrong, I don’t mean to call it basic in any way; Bishops is nothing short of experimental and innovative in her music. For example, in her song “White Flag,” there are notable traces of electronic sounds that blend in seamlessly and draw you in. It’s fast, it’s exciting, it makes you want to dance. It even makes me want to roller skate for some odd reason.

Before I knew it, my day of Bishop-Briggs-Spotify-Listening marathon was over. This brings us to the night of the concert itself. Last minute, I asked my friend if she wanted to pick up a ticket and come along. That’s when we realize the show was SOLD OUT! Brooklyn Steel with its 1,800 people capacity was sold out. I can imagine Bishop Briggs must’ve been ecstatic when she found out. She mentioned it during the show and said that this was her biggest sold-out show to date. I’ll bet you that there will be bigger ones in her near future.

Foreign Air opened for her, and they were good; especially the band member who was alternating between playing the drums and the guitar. He was very expressive, and it made for some great photos. After Foreign Air finished their set, it seemed like an eternity before Bishop Briggs jumped onto the stage. From the start, I could tell it was going be a high energy show. I was right. Her energy was refreshing, and she skipped around the stage and jumped without missing a note. Meanwhile down in the photo pit, my arms were getting sore from just trying to follow her movements. I guess you could call her a “hard act to follow,” in a literal sense. You could tell crowd fed off her energy because in no time everyone began to dance and sway around.

The crowd demographics ranged anywhere from 30 something to 8 years old accompanies by their parents. Like I said earlier, her music is likable by the general public. I remember at one point, a father in the crowd screams out “my daughter loves you!” I’m sure he was enjoying it too. Bishops gave an engaging balance between crowd interaction/talking and performing. Everyone had a good time.