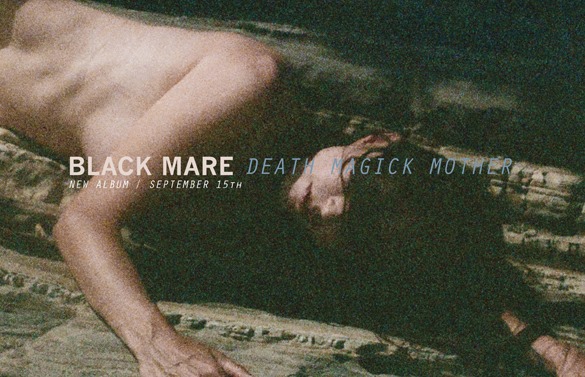 Later this week, Los Angeles, California’s BLACK MARE will unleash the consuming bounty of Death Magick Mother. Seven songs in length, this documentation captures driving force, Sera Timms, amidst a dynamic cohesion and confluence of inspiration unlike any prior. Whereas previous output operated under a founding principle of rhythmic repetition and atmospheric simplicity toward trace-like escapism, Death Magick Mother is Timms stepping right in front of the lens for a closeup.

In advance of the release of Death Magick Mother, today Cvlt Nation is hosting an exclusive premiere of “Ingress To Form.” Issues Timms of the track, “This song started out with the idea to illustrate a raw life force energy coming into material form…I was thinking about Genesis in the bible, and the Big Bang and many other creation theories. Chaos organized into a human form seen through the eternal Mother’s eye. Then there is harmony, and relationships form, and our bodies are like cauldrons carrying our raw life force around through these relationships which are like ingredients in the cauldron. Personally, this is about an experience of pure innocent love with someone that truly humbles you… to love someone so deeply and unconditionally that you allow your ego to be decimated over and over until all that remains in your body is love. “
Adds Cvlt Nation, “Death Magick Mother embodies the power of music to create, effect

and destroy, and is a stunning sophomore release and a must have in your record collection. Listening to Timms’ ethereal voice on ‘Ingress To Form,‘ it’s no surprise that BLACK MARE was invited to perform at the recent Women’s Mass benefit hosted by The Satanic Temple – there is an electric atmosphere to her music that makes my hairs stand on end and my skin break out in goose bumps, as if she’s harnessing the electromagnetic waves traversing the earth with her voice and directing them with purpose at our self-harming species.”

Death Magick Mother will see release digitally via Magic Bullet on September 15th with LPs to follow. Preorders are currently available at THIS LOCATION.
Mixed by Andrew Clinco of Drab Majesty and mastered by Dan Randall at Mammoth Sound Mastering, on BLACK MARE‘s Death Magick Mother, bolder arrangements lend themselves toward soaring, dynamic vocal melodies, and nuanced harmonization to highly-satisfying effect. Spot-on performances and command of all instrumentation across the spectrum further propels the sense of arrival in mastery over her chosen craft. In many ways, this album is an awakening for both its creator and listeners alike.
BLACK MARE w/ Junius, Mustard Gas & Roses: