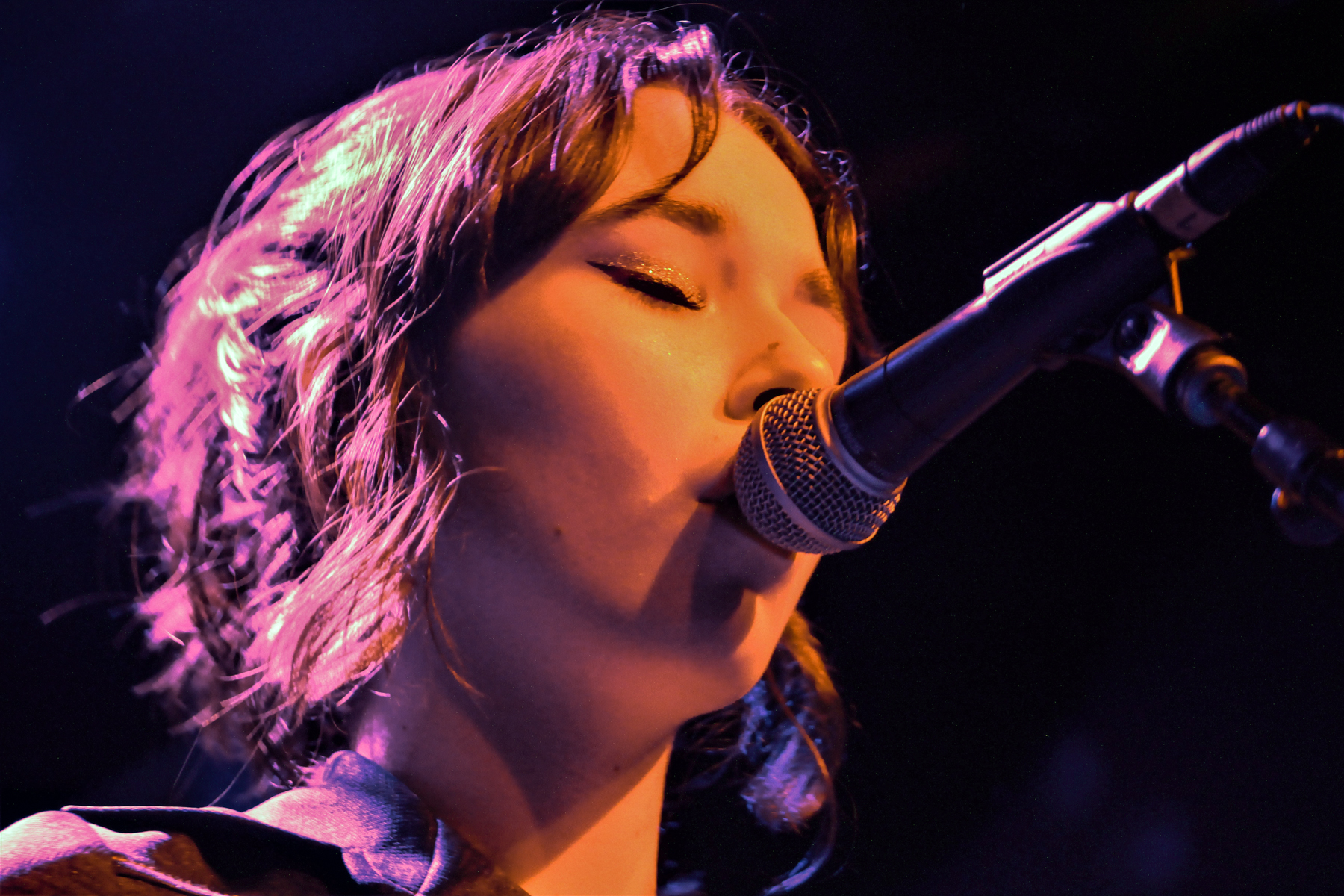 The Regrettes (with opener-Stef Chura)

June 21st is the official first day of summer and Lydia Night, frontwoman of punk rock band The Regrettes, summed up everyone’s mutual feeling: “I thought New York was supposed to be cold – it’s fucking hot as shit.”

As the night first begins, surrounded by lavender and pink balloons tied to the amps on the Rough Trade NYC stage, with equally colored streamers hanging above the air as a playfully fun font boldly displays THE REGRETTES on the backdrop, teenagers rush to the front. A few aggressively pop the inflatables blocking their view just in time before Detroit native musician, Stef Chura, walks onto the stage surrounded in low-light.

Kicking the evening off, finger-picking her guitar alongside her drummer, Stef Chura– emits a mesmerizing presence. Shrouded in the darkness, with a scarce red light

illuminating a few features on her face – it is the sumptuous, pleasant melodies accompanying Chura’s grunge-esque, 90s nostalgic voice that engulf the scene. Messes is Stef Chura’s magnetic, highly praised debut, from which her setlist is pulled and remarkably, Chura and her bandmate Ryan Clancy, maintain the high-spirited, idiosyncratic atmosphere so expressed on Messes throughout their performance. Stef Chura exits the stage, leaving the crowd buzzing, aching for more – just in time for The Regrettes.

Still in their teenage years, The Regrettes don’t allow any uncertainties about their talent based on their age hinder their performance and delivery at all. Their confident and quirky presence once unveiled ignites an ecstatic response among the audience, and The Regrettes kick into playing their debut album Feel Your Feeling Fool! with “I Don’t Like You.”

The Regrettes are a seamless blend of clashing genres – 60s girl pop and 70s gritty punk-that contradict each other significantly (their style has been coined “Bikini Kill Meets The Ronettes” ), but The Regrettes easily manage to mold their own unique, refreshing tone while pulling from these influences. Melodic and fresh, 16-year-old Lydia Night, croons into her microphone tales of scorn, angst, fun, female empowerment, and f-you’s. Her bandmates, bassist Sage Nicole and guitarist Genessa Gariano, stand stall with ridiculous smiles on their faces as they enjoy the show, occasionally flashing a smile to Maxx Morando behind his drum kit. Night packs every song with a potent punch – she’s ruthless but gentle and embodies teenage emotion in her craft. One of the many things that makes The Regrettes so appealing and welcoming is their ability to truly connect with the audience in a magical sense, empowering young teens to overcome the misconceptions and backlash they often deal with.

Performing their hits “Seashore” and “Hey Now”, The Regrettes display their explosive

energy while prancing around the Rough Trade stage. Lydia Night catches sight of an eager fan, front row and center, passionately belting out the lyrics and Night proceeds to give the girl the microphone right before jumping into the crowd, twirling and dancing around as balloons cascade below.

To properly wrap up the night, The Regrettes perform The Sweet’s classic, ending the performance with a howl of “It’s! It’s! It’s! A! Ballroom Blitz!!” It most definitely was!

0 comments on “The Regrettes at Rough Trade NYC”