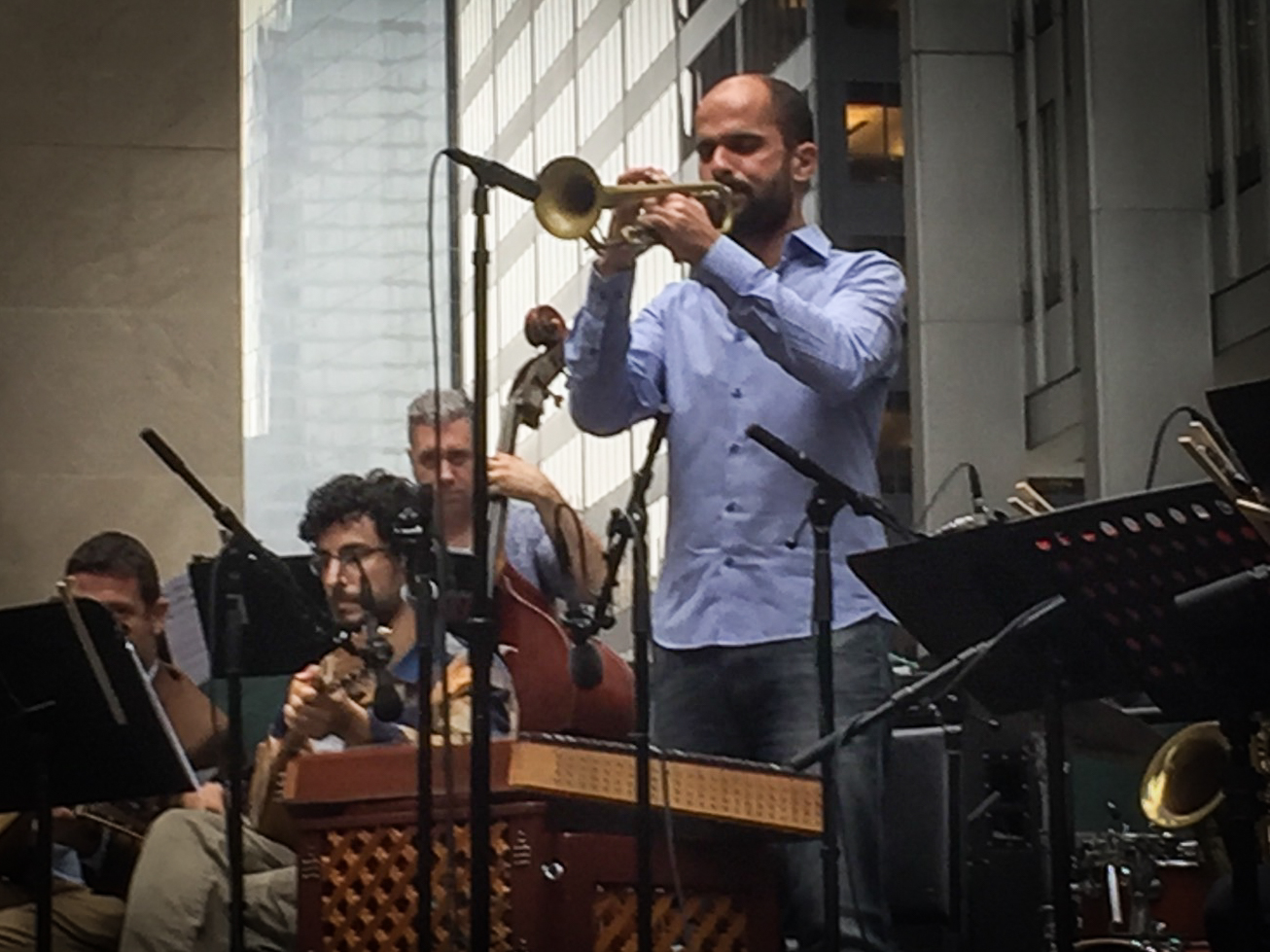 Who is Amir ElSaffar? Not only is he the acclaimed composer, trumpeter and multi-instrumentalist, but he is also someone who literally turned an overcast NYC skyline into a magical, musical carpet ride!

This past Friday night celebrated Not Two, the debut album-release from ElSaffar along with his praised Rivers of Sound orchestra, taking place at the 16th annual Rivers to River Festival. With the show being held at the outdoor plaza on Liberty Street, the forecast called for showers and practically after the first drops had fallen onto the gathering crowd—the rain came to an immediate halt. Serendipitously, this allowed for an evening of the enchanting collaboration of Arabic music and jazz to fill the summer air.

ElSaffar’s orchestra brings together 17 musicians—yes—17—from all different backgrounds and musical styles, ranging from American jazz to the centuries old–Iraqi maqam. Even with this large number of artists, each member had an opportunity to shine, all while personifying what an ensemble truly is.

Hitting the stage for what was the group’s third time in New York, the crowd was quickly

mesmerized & transfixed upon the thunderous opening beats of “Infitah”, the first incredible, crescendo building opus from the almost two hour set. Playing the entire album in full, ElSaffar transported us to a place one would never want to leave.  Feeling like we were in a romantic dream, taking the most joyful train ride through a glittering desert, “Jourjina Over Three” and “Penny Explosion” brought the diverse, captivated audience to lands far away—so very distant from the surrounding skyscrapers that provided our backdrop, practically making them invisible. With Amir alternating between composing, playing both trumpet and santur—one could witness the conception of a unique sound that touches everyone in the most personal of ways.

“Ya Ibni, Ya Ibni (My son, my son)”, a piece of music that evoked a tale that was about to be told, a tale that we all wanted to hear and be affected by.  This arrangement provided one of the (many) standout moments of the show—with the observation of a visibly moved Amir, as the haunting, seductive sounds emanated from the array of instruments—from saxophone to bass, to violin, to the piano keys that were tickled to perfection by Aruan Ortiz. Just as the 12-minute musical tome is performed, the sounding of local church bells from a neighboring church began to toll and the audience took a breath, laughed and applauded—as did Amir and the rest of the orchestra.  The timing was, pardon the cliché, heavenly and no one was surprised by its occurrence.

“Shards of Memory/B Half Flat Fantasy” was yet another highlight, as Jason Adasiewicz’s

work on vibraphone was utterly spectacular. One becomes lost in their hypnotic compositions, leaving one easily able to become dizzy from the intoxicating musical narratives that are woven. This was one moment where that certainly happened, and the band was loving every minute of it, leaving everyone to get up on their feet and give a standing ovation to the distinctive excellence that ElSaffar and his musicians have created.

This performance was free, but what this exceptionally talented group of musicians provided was ultimately priceless. Be sure to check them out in February 2018 when back in NY—but don’t wait until then. Go out and get Not Two…you’ll be giving yourself a gift of sheer musical ecstasy and a chance to explore exotic destinations—simply by just putting Amir ElSaffar and Rivers of Sound in your ears and heart!