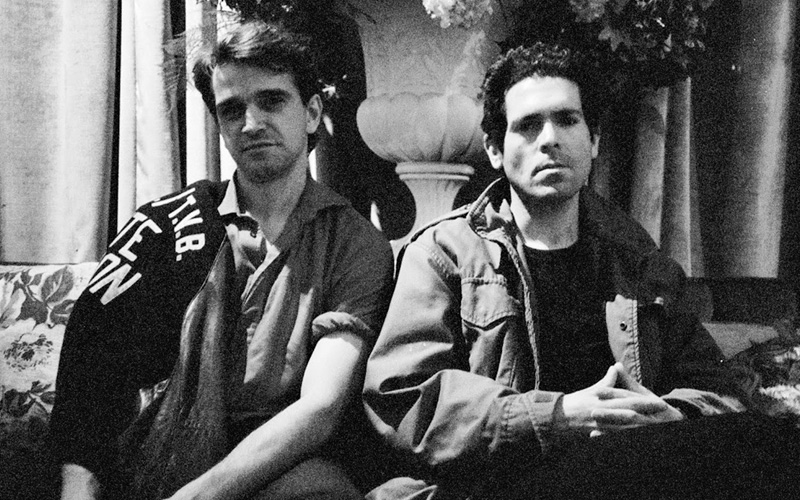 “With throbbing synths, sweeping guitar, and lyrics both poetic and streetwise, TV Baby have created a sound that captures both the angst and optimism of their time.“ – Purple

TV Baby shares new video “Beware the Holy Whore” today via Cool Hunting. The video was directed by Stephanie Cerni and stars Angel Clouthier. They describe the track as a “late Velvet Underground guitar jam on a bed of analog synth.” The track is from their recently released debut LP Dignity Don’t Dance (out now on Deus Records) which was produced by Gabriel Druzzi (The Rapture) and mixed by Ewan Pearson. TV Baby is NYC-based duo Matt Mcauley and Brian McPeck (formerly of A.R.E. Weapons). Check out their recent interview with Office Magazine here.

T.V. Baby is a project that came to life during 2016 in a makeshift hideaway deep within a remote corridor of industrial New York City.

The romantic isolation of their decaying surroundings leant its vibe to the otherwise occupied musicians as they intuitively explored their formative musical experiences while playing at shifting their roles around within the band. From these changing dynamics, the close friends’ debut album Dignity Don’t Dance was born. It comes on the label Deus Records, an imprint that continues the great independent NY tradition of dropping highly danceable music with rootsy, rock n roll swagger.

The Long Player format allows the band to meld the most naïve aspects of punk meets pop with mature, expansive and explorative grooves across ten tracks. Initially a set of sketches, the material soon became earworms that the band revelled in refining together. It is something that sits naturally with the three-piece and the result of their adaptations and challenging each other afresh is an immersive experience where the joy of creation is ever present for the listener.

The LP shows TV Baby taking hold of many sounds and combine them into something that is distinctly their own. Although rooted in electronic sounds, the unashamed and unmistakable homage to many seminal New York bands bubbles to the surface on each of Dignity Don’t Dance’s tracks. The rawest themes of lust, love, sexuality and abandon keep the album mercurial and constantly shifting in its form – from track to track and from bar to bar. This dynamism is guided by respect for the five classical elements and topped off with a mix down from Berlin based Brit Ewan Pearson.

With the needle in the groove tracks of soaring ease can give into taut introspection and moments of bracing sensuality. Mechanical funk, laden with lucid dreams and chemical illusions vie with raw, earthy anthems from the basement and garage. Loose limbed abandon is born from rum soaked, and acid flecked AOR.

Distinct from its musical roots and remote from a scene or set of influences, Dignity Don’t Dance is a kaleidoscopic conveyor of familiar mantras hazily recalled, jacked up and reimagined with the ease of a collective fully in tune with itself.