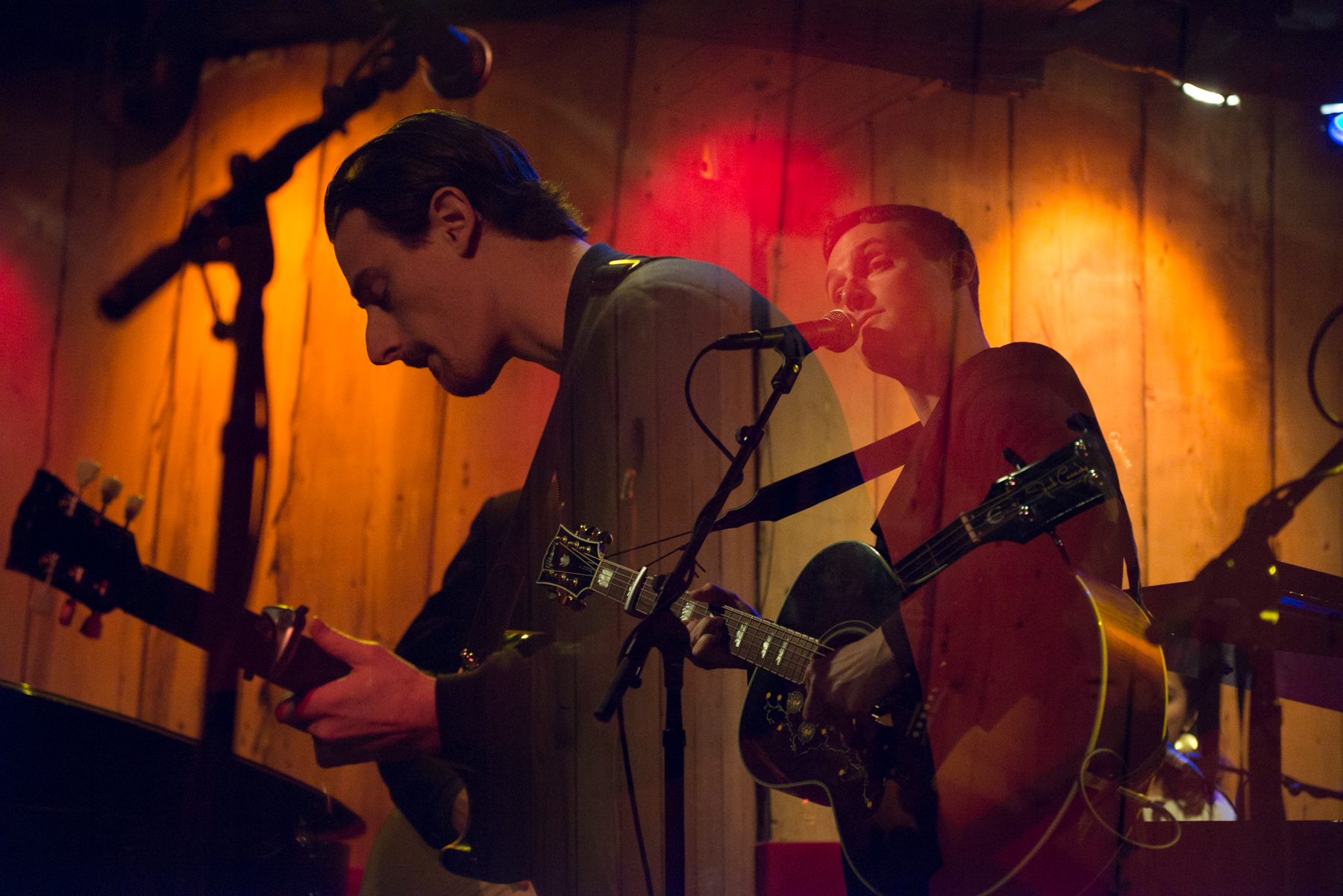 Everything Turned To Color

until after 10 pm, simply the nature of New Yorkers.  The only exception is when a special band is releasing a long-awaited album, which was the case on Friday, March 31st.  The band, Everything Turned To Color, not only met that exception, but they overwhelmingly shattered it—- by selling out both the 7:00pm and 8:30 pm shows. To make it even more impressive, fans trekked through heavy rain and major traffic to be there.

Everything Turned To Color, a band formed by the brothers Bryan Weber (vocals and acoustic guitar) and Kyle Weber (electric guitar), when they teamed up with Neha Jiwrajka (vocals, piano, and ukulele), have been crafting and perfecting their music since 2015, and were ready to introduce us to their debut release– Life Imagined.  As a generous thank you, the band handed out free copies of the LP as the crowds ushered down into Stage Three at the Rockwood.  The CD turned out to be a godsend on the long, rainy drive home that night.

A fitting start to the night, Neha’s euphonious voice opened with the lyrics “Once upon a

time in New York City”, the introductory lines of the very uplifting “Once Upon A Lifetime”, and complimented beautifully by Bryan’s harmonious backup vocals. It allowed Neha’s excitement to shine through, as she next welcomed everyone and let us know how special the night was for them. They followed it with a song that serves as a great reminder in life, “Something To Live For”, one of many tracks on the album that have such a simple, but a very meaningful lyrical statement.  It is worth noting that along with the three band members, they were also joined by their producer & accomplished musician, Blake Morgan. He not only helped make the LP, but also united on stage with them to play bass.

A sobering “Somebody Loves You” saw Neha move to the piano, as drummer Jonathan

Ellinghaus kept a steady beat on the high hat. It is a very touching song that really brings on strong emotions.  With those intense feelings still lingering, Bryan decides it is the best time to let us know that backstage before the show, the conversation turned to kids and byproduct secretion! I guess it was Weber’s way of letting us know it was ok to laugh now, and it worked.

Before picking up the ukulele to play their namesake song, Neha, the only woman on stage– decided to introduce the men playing alongside her. Cheers for the band members from the crowded fan base that was too full for the venue, taking up all of the seating and most of the standing room, Everything Turned To Color was literally absorbed by maximum capacity recognition and applause.

The introduction to the next song was given

to us by Bryan, as the first tune the band ever played together.  The song is credited in convincing Neha to join the brothers on their musical journey.  “Invisibility” is no doubt a song meant for Neha to sing, with its poetic words and entrancing score.

Closing the set out with the first single released from the album, “When You Wish Me There”, Bryan introduced us to an old

friend, Ian Sharkey– the original singer/bass player from the Webers’ former indie rock band Zelazowa. A special moment, as Ian took to the stage to join in on bass and Blake moved to piano.  It was all smiles as the Webers and Ian seemed to fall right back into playing together.

The band came back on stage to thank the packed house after playing the album in its entirety.  Not expecting the overwhelming response for an encore, the three had to huddle together to decide on another song to satisfy the audience’s appetite and settled on a calming number called “Motherless

Child”. Neha began to sing the first verse with Bryan playing guitar, and it sounded beautiful, but then something magical happened. At the beginning of the chorus, as Kyle masterfully manipulated his guitar-effect pedals to create a church-like organ sound, the audience was practically transcended as if in a sky-high cathedral.

Playing all of the tunes on the CD was a perfect way to showcase the talents of the musical collaboration of Bryan, Kyle and Neha. As the group masterfully blends Neha’s jazz background and the Weber brothers rock/ folk style, they have created a new unique

genre that cannot be mistaken for anything but Everything Turned to Color.  Together with Morgan’s mixing and production, this body of music was the reason why Rockwood Music Hall found itself sold out so early on a Friday night.  The excitement was seen & felt throughout the venue, as the next show’s audience was already packed at the bar waiting to get in.  One fan from the early show actually waved the CD high in the air and stated that she was going to share this music with all her friends! Quite a deserving testament.