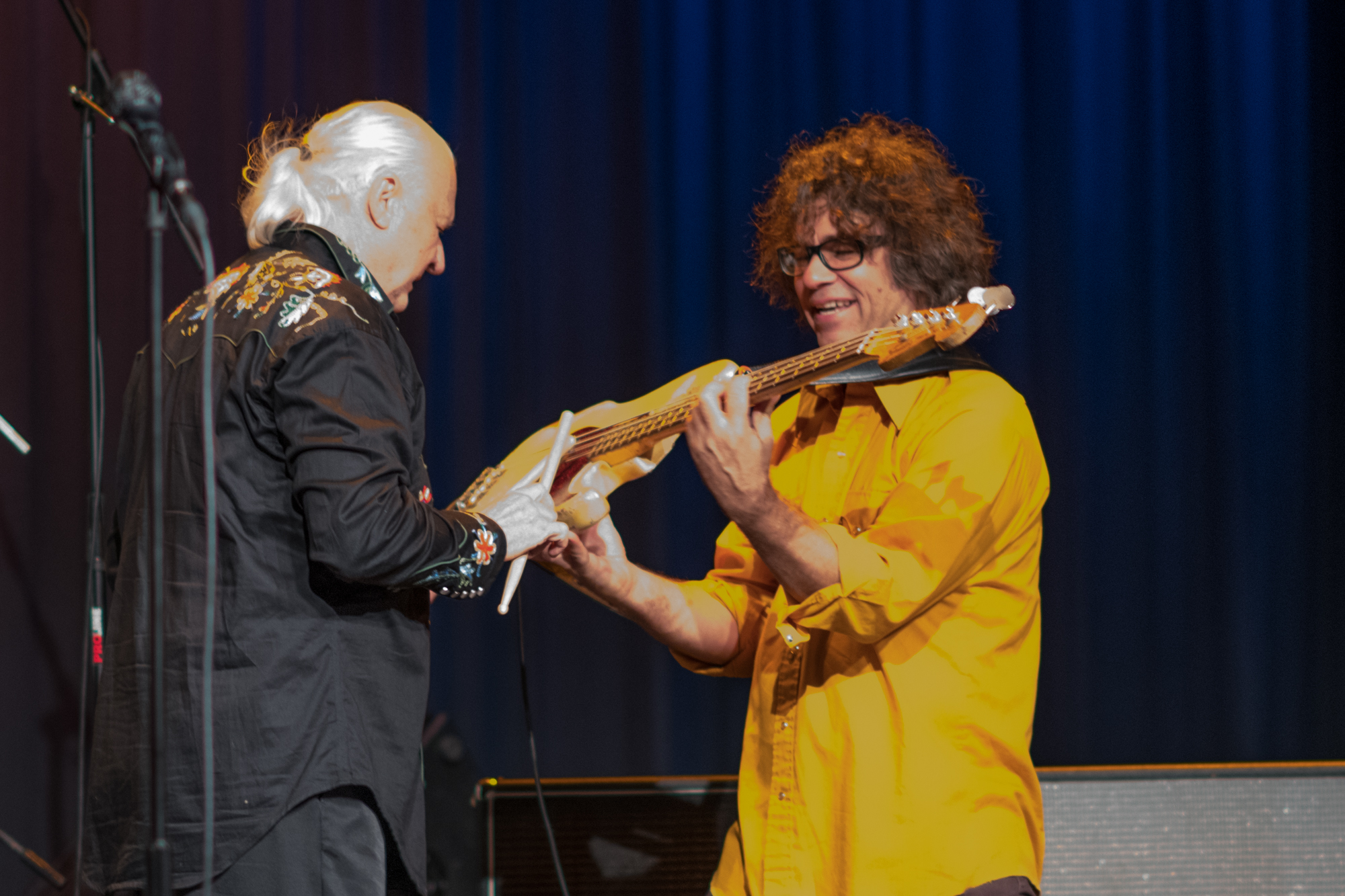 Dick Dale, the ever-innovating legendary guitarist and the surf music phenomenon he is credited for, invaded the tri-state area, playing four incredible nights this past summer.  It started out on August 23rd at the YMCA Boulton Center for the Performing Arts in Bayside, Long Island.  This is where I had the chance to see the pioneer and he came out fighting and fired up!  Dick’s first response coming out onto the stage was aimed at the amps set up facing him. Dick likes nothing in between him, his guitar and the audience.  This is something that is so special about him, as he really enjoys connecting directly with the fans and that’s exactly what he did. The living legend didn’t disappoint and blew the roof off the theater!

Dale has forever revolutionized live concerts, doing things I have never seen performed before. A perfect example was when he played a fan favorite bass solo with drumsticks, as his bassist Sam Bolle holds up his bass guitar so Dale can hammer and strum it with the sticks.  The reason Dick even had the drumsticks was for another concert first I witnessed. Before the bass solo, he got behind the drums along with drummer Gerry Porter as the two pounded out an amazing drum solo. His versatility is astounding and something that his fans have long admired and respected.

The shows that Dick puts on are jam-packed with favorites like “Pipeline”, “Hey! Bo Diddley”, “(Ghost) Riders in the Sky’, “House of the Rising Sun”, and a fitting tribute to all firefighters, policemen, and military personnel with a tear-jerking rendition of “Amazing Grace”.  Of course, capping off each night Dick plays the song that made Quentin Tarantino film Pulp Fiction famous, his signature tune “Miserlou”.

The lack of photos presented here was due to Dale’s request that no professional photography be taken at his shows.  Now I have heard that this is a common complaint among photographers, but I have come to appreciate that he has been crafting concepts that no another musician can come up with, and it is for this reason that his ideas ought to be protected.  In return for the limited images, the 79-year-old more than makes up for it in the number of concerts he delivers.  In addition to the Y-Boulton show, he effortlessly moved from gig to gig. Traveling next to the Wonder Bar in Asbury Park on the 25th of August, then two days later performing at Brooklyn Bowl, which was ultimately followed the next night in East Hampton at The Stephen Talkhouse.

Dick Dale continues to put on extraordinary shows, engaging the audience with his influential music and lecturing them on the history of rock & roll.  I was so lucky to have had the chance to see this performance as well as one of Long Island’s great theaters.  The Y-Boulton Center is a new approach to the audience experience.  It is their high achieving customer service that makes them so special.  Every corner I turned there was a member of the staff trying to ensure every concertgoer was happy and comfortable.  From the moment I walked in at the ticket booth, to the kind usher who directed me to my seat, it was top-notch all the way—how it should be wherever the venue may be. It was a fitting place to watch one of the true greats continue to ride the rock waves he created so long ago!

0 comments on “Dick Dale Surfer of the Rock Waves”