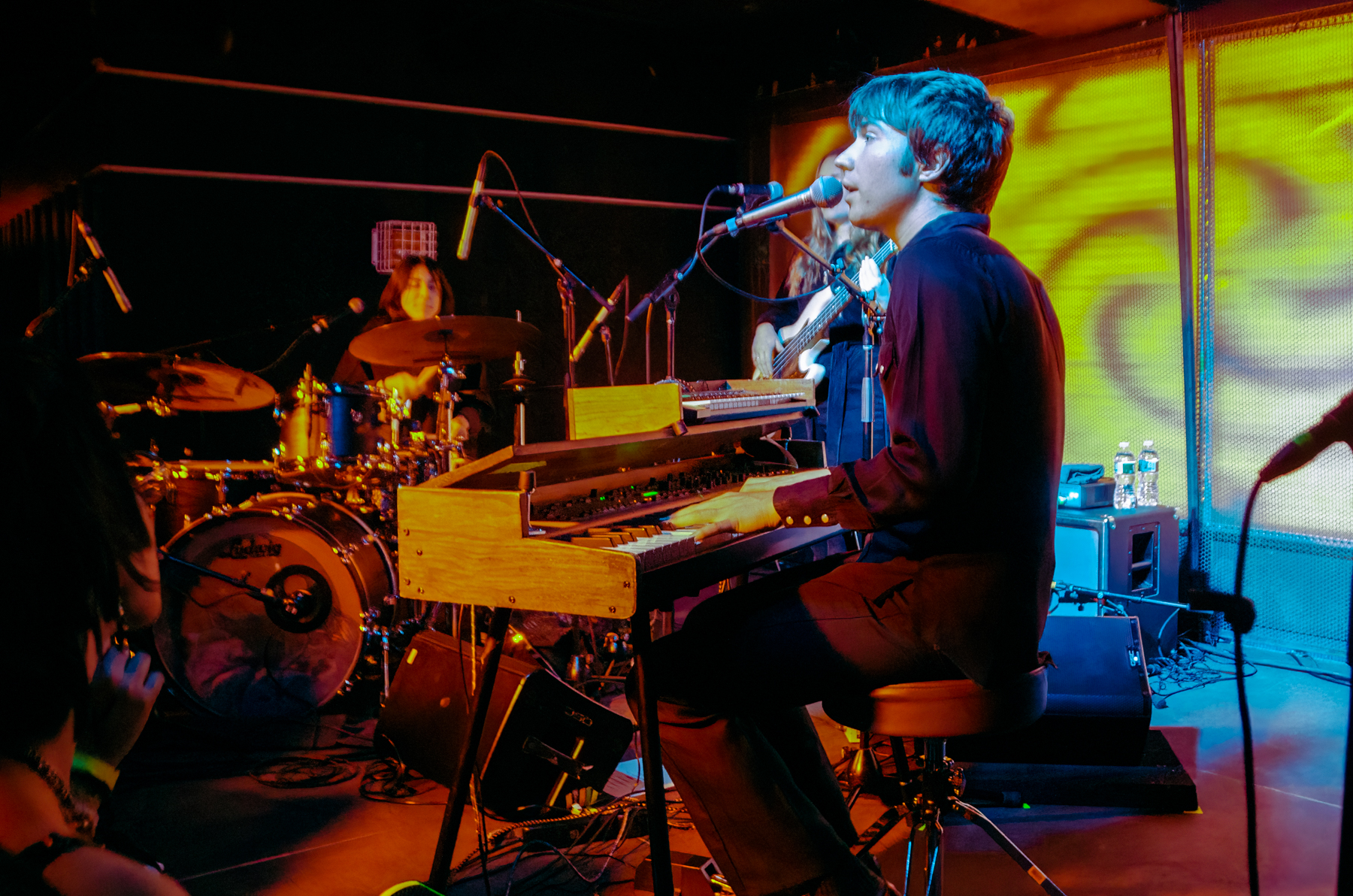 Outside of Elsewhere, starring at graffiti and a row of weather-torn backpacks, hanging on the wall of a store called “Safety Bros NYC.” It’s sprinkling, and there is a crowd a block long an hour before door opens. Behind me is a girl, visiting with her father from Philly. They have a facetime call with what I must assume it is a stepmom based on the girl’s reaction after they hung up. Time moves slower than it should leading up to the hour that doors open.

The girl is telling her father he needs to be more patient. He says he isn’t impatient; he is yawning because she is tired.

“What time is it, anyway?” she asks him.

“They are five minutes late. We should be up there by now.” She stamps a defiant foot down.

“I see movement, we should be going in any time now.”

The gates to heaven part, the clouds pass, and I am separated from the two inside of the small and darkroom known as “Zone One.” Girl Puppy opens the show. She is platinum blonde, darling, and is exactly the type of girl who would tell you if you had spinach in your teeth or if you had a cute manicure. She is your kindest friend and a confidant.

Her songs are sweet, and she lets the audience into several unreleased tracks. Someone in the crowd promises they won’t leak them before they are out later this year. Her eyes sparkle and she laughs, flowing into a song she wrote for her brother.

She plays the songs “Cheerleader”, “Miniature Furniture”, “Swallow”, “Hideout”, “Denver”, and “As Much as I Can, “I Want to Be There For you”. Once she finishes, she encourages everyone to check out the merch table, not to buy anything, but to visit with her and say hi and maybe check out the stickers if they felt so inclined. She leaves the stage as gracefully as she entered, but not before making sure to thank her guitarist and the beat machine she was using to help make up for a lack of band members.

A girl, no older than 15, has the Guinness record for snatching a setlist of the stage during the setup for the Matt Maltese show at Elsewhere. Her smile is beaming and infectious. She makes sure to cheer on each of the crew members as they test microphones, strategically place water bottles, and make sure that (until moments later) the setlist was ready at the foot of the keyboard for Matt.

There are many like this girl in the crowded room. There is no space between the stage and the bodies of the audience. Each person at the front is all making friends with one another, eager, and full of hope that Matt will look out into the crowd, meet their gaze, feel love at first sight, and dedicate each song to them. People are happily moving around to make space upfront for the shortest, then behind them is the tallest, then chaperones, in that order from stage to exit.

Matt Maltese takes the stage. He is wearing a sharp suit and is incredibly charming. He warms up the audience on the microphone after an uproar of applause. A girl in the crowd shouts “Peanut Butter.” I’ll admit, I’m not very well versed in the lore of Matt Maltese, so I assume that this was some underneath-the-iceberg insider inside joke. Matt begins the show, beautiful red swirls dancing on an LED screen behind him as he plays a ballad.

song “Good Morning.”  Very appropriately, the lyrics call out that it is “Good morning, it’s April something. Heavy clouds with a chance of crying.”

He plays into “Rom-Com Gone Wrong.” Each of his songs is very obviously well-rehearsed, as it doesn’t sound any different from the recordings. His songs range from devastating to cheery but are never deviating away from being lovely.

If a note is out of place, it could only be coming from the audience singing along, word for word. They sway back and forth as he sings. The girl yells peanut butter again. There doesn’t seem to be a rhyme or discernible reason for them happening, but I am trying to find the trigger to understand it a bit better.

Matt talks to the crowd after the song. He notes how he had the refrain come to his head while he was on a plane. Scared to lose the thought, he mumbles the song into his phone, alarming a woman sitting next to him. He dedicates that song to her, as he does at each performance.

Next is “Curl Up & Die,” which is a song that has allow for a call and response for The Girl with The Setlist. She professes her love, saying she would do each of the things he has outlined in the song, and he gives her a gentle smile.

The show continues like this. He plays “You Deserve an Oscar,” (peanut butter count is up to five at this point). At each show, he says after the song, he reads out tweets that he finds humorous that people have tagged him in. The winner for this night was Olivia, who said “I’m going to piss and barf and cry at the show.” He sends well wishes to Olivia. In comes another peanut butter.

No one else in the crowd seems to be joining in the peanut butter shouts. I wonder if I am losing it when Matt addresses it as well. “What’s with all this peanut butter stuff? Do you want a story on peanut butter? Fine.” And proceeds to tell us how he used to eat half a jar of peanut butter a day. “Once I stopped, he was able to see my cheekbones again.”

He plays on, hammering away at the heartstrings of each fawning patron and hammering away at the piano. He creates powerful emotions and keeps the intention and feelings as raw as they are on the record. Never once did Matt seem bothered by the crowd shouting at him, and he even liked to play along with their games and shouting.

We learn that Matt likes to indulge and imbibe. He tells us about taking and edible and going back to his Airbnb while on tour. Ravenously hungry, he needs to eat. His Airbnb hosts said help yourself to anything, except absolutely for no reason can you eat the ice cream in the freezer. Gelato. Blueberry. Dipped in chocolate. Forbidden. Matt couldn’t resist. He ate the entire 12 pieces. Searching high and low on the internet, he couldn’t find a replacement anywhere, so with a tail between his legs, he wrote an apology note, resulting in him being banned from Airbnb for two months.

The night continues, a soft glow always behind him as he delicately sings and plays piano. He closes with his magnum opus, “As the World Caves In.” Every phone comes out of the pockets as each person records him playing, no doubt getting ready to post the video on TikTok, which has helped with the success of the single.

Everyone in the crowd cheers wildly. They are elated and have surely made a memory that will last forever tonight.

0 comments on “Matt Maltese at Elsewhere”