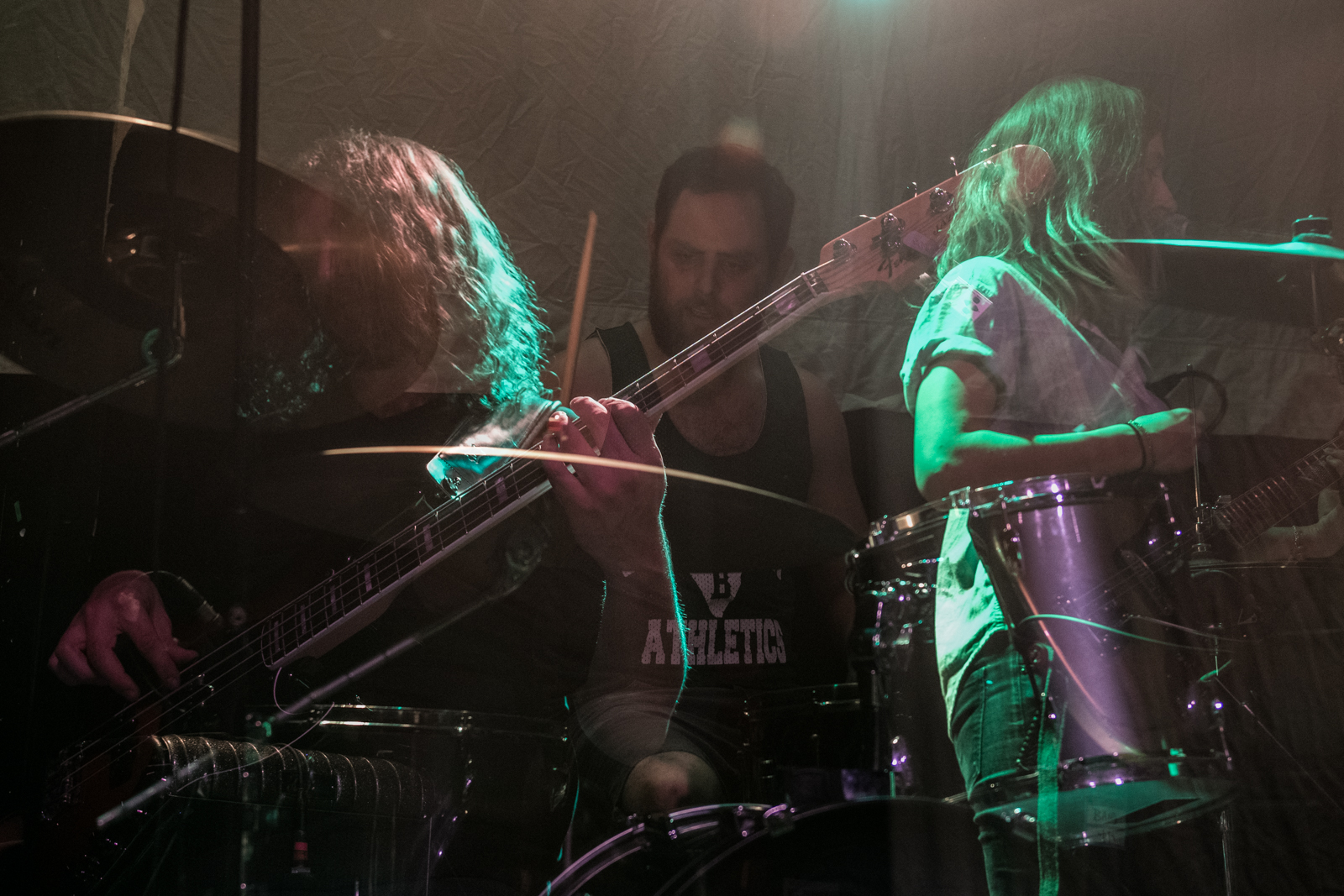 “Stirring stuff, it’s the perfect entry point for those new to the Slothrust universe.”
– CLASH (On “Sleep Eater”)

“The insane shredding, crazy bass lines, and mad rocking are still there, but it also feels like a natural evolution from their last record, especially with Leah’s lyrics, which are poignant and funny and you can relate to as an adult going through adult things and living through adult shit without wanting to pull your hair out.”
– Lenny Letter

“Slothrust have released some their best songs yet on their recent album ‘Everyone Else’. The Brooklyn-based trio’s music-replete with lo-fi guitar, abrasive vocals and lyrics full of awkward yet affecting metaphors alongside blunt emotional confessions…”
– Alternative Press

“Everyone’s Else stands out, making the two year period wait worth every moment” 4/5 Boobs
-BUST Magazine

“Listen to songs by Slothrust, and you’ll hear aggressive sounds that hearken back to early-’90s rock bands like Nirvana and Dinosaur Jr. Listen more closely, and you’ll also hear elements of the blues that the band’s members learned when they met in their college’s jazz program.”
– NPR MUSIC

“Slothrust exemplify how colorful, fun and insightful rock music can be. The best kind of weird.”
– CLRVYNT

Autostraddle has premiered the video for Slothrust’s single “Pigpen”, the final track off their 2016 album ‘Everyone Else’. When talking about the video, lead singer Leah Wellbaum said, “We wanted to make a music video that stands on its own as a piece of art. Everyone who worked on this had an extreme focus on compelling, surreal imagery and concepts. Our intention was to make a type of music video that we haven’t made before, and don’t see very often.”

Slothrust will tour North America this summer including a performance at Lollapalooza on 8/4. The band’s most recent album ‘Everyone Else’ is out now on Dangerbird Records and the band has released a wealth of visual material to accompany it. Music videos for “Sleep Eater”, “Horseshoe Crab”, “Rotten Pumpkin” and “Like A Child Hiding Behind Your Tombstone”, as well as live videos for “Rotten Pumpkin”, “Horseshoe Crab”, “Pigpen”, and the Louis Armstrong classic “What a Wonderful World”. The band just finished wrapping tour dates supporting Highly Suspect.”

* with Ron Gallo
^ with Tancred
+ with Pretty Reckless (Lollapalooza after show)

Slothrust is Leah Wellbaum (Vocals,Guitars), Kyle Bann (bass), and Will Gorin (drums). The trio first staked out their unique strain of jazz- and blues-afflicted rock as students at Sarah Lawrence College. The band’s 2012 debut Feels Your Pain, and its successor 2014’s Of Course You Do, established the band as a breed apart, serving up deceptively clever epics that veer satisfyingly between incandescent riffing and pop hooks, winsome anxiety and powerful heft.

“People have always had trouble comparing us to other bands, but someone recently described us as Nirvana meets Wynton Marsalis, and I loved that,” says Wellbaum. Even the band’s name inspires a beat of thoughtful consideration as the eyes take in the letters and the brain makes its snap judgement: Slo Thrust? Slot Rust? Slo Trust?  Sloth-Rust.

We all studied jazz and blues, so I often use chords and voicings that aren’t quite as

conventional for contemporary rock,” she continues. “Certain harmonic movement can get stale, so I try to incorporate colorful notes to give it more depth. The improvisational spirit of blues music is also something we try to always keep with us, even in more composed playing. I am drawn to musicians a bit further outside of the rock tradition, such as John Fahey, Elizabeth Cotten, D’Angelo, and Portishead. Growing up I listened to a lot of R&B and classical music. And musicals.”

While Everyone Else clearly shows Wellbaum fulfilling her early promise as a singer, it’s where she hits her stride as a lyricist: Pulling the listener under the surface to explore a submerged world brimming with exotic creatures. Water motifs abound, detailing oddly off-kilter observations about floating, submerging and drowning that are anything but morose. Instead, they contort and reflect worldly truths about life on dry land.

Nowhere is this vision clearer than on the slow burn of the album’s centerpiece track “Horseshoe Crab.”  Here, with storm cloud riffs and Will Gorin and Kyle Bann’s perfectly calibrated rhythmic undercurrent, Slothrust erupts in a geyser of emotional and spatial distance, as Wellbaum observes, “I don’t have anything in common with myself, except that I came from the sea, like everyone else did.”

“Like a Child Hiding Behind Your Tombstone” opens like some bizzarro world lullaby dispensing sage advice: “Drink seltzer, smoke weed when you can’t sleep. Think about shooting birds, everyone has got a violent streak.”  Then, as the guitars explode, the rhythm section dials into stylish, disciplined groove to set up an expansive instrumental break that gently floats to a close with Wellbaum, at peace: “Hold me under the water. My lungs are filling with plankton. But the lake is not lonely. No need for you to come with me.”

Above all the overriding ethos of Everyone Else is its sense of inclusiveness: all people, every feeling, quiet, loud, any time signature. With a snap of the neck the band launches into the hyper-adrenalized “Rotten Pumpkin” with Wellbaum singing in a rapid-fire vomit burst, “I’ll make you sick because I’m soft water. Reach inside of me, and scoop out my seeds.” This midpoint between grunge and art rock is the aesthetic Slothrust elevates: sharp-eyed individualism, serious musicianship, humble intelligence, controlled abandon