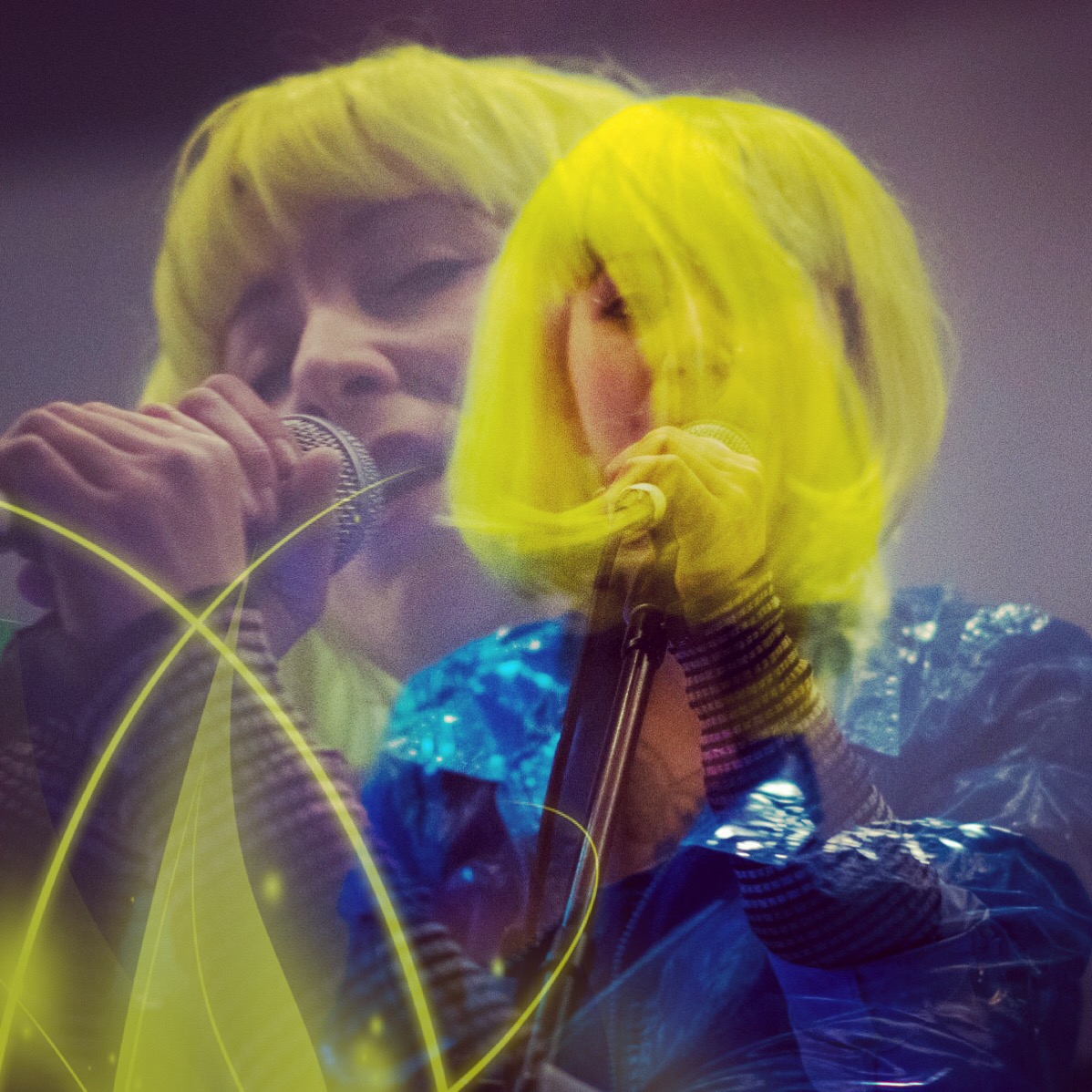 It used to be when I thought of motel pools I would picture the reflection of a neon vacancy sign projected on the chilly waves of a pool where a few late night drunk tenants might be playing. As of December 29th, I have changed my view. Instead, it’s now the image of the band Motel Pools that I saw at Union Pool in Brooklyn, with the hot sound waves reflecting off Chiara Angelicola’s yellow neon wig.

Chiara has brought her band Motel Pools over from the West Coast for two important reasons; one was to join Ice Balloons in a benefit to raise money for Standing Rock Sioux and the other was to share music from her Motel Pools Volume II EP–a real gem that has quietly sneaked up on us– one that is filled with some really great songs.

Angelicola shows her musical versatility between her Bird Call work, which is more electronically driven, and her Motel Pools which is far more punk rock.  It is not usual that you find someone with the talent to cover both types of genres so passionately. Motel Pools punk rock sound was made possible by the full band; Chiara Angelicola- vocals, Dave Scalia on drums, Tim Lappin on bass, and on guitar, Alex Foote & Kirk Schoenherr.

They kicked off the set with “Monste

r Girlfriend” from Volume 1, and pretty much-alternated songs from Volume 1 to Volume II, playing all of the hits.  One thing you really notice from this band is that even though they are playing what is considered punk rock, which tends to be stripped down and not so neat, Motel Pools music is a bit more complex, and it is played very neat and tight—saying a lot about the talent of these musicians.

“Monster Girlfriend” was followed by “Reject Me”, with its instructing command lyrics and fitting guitar riffs kicking off their latest music. There is a slight musical difference between the two volumes— whereas the first is styled as a bit of fast abrasion, and the follow-up is slightly more pop, pop in a way that makes punk music fun.  The band does an amazing job blending the two sounds from song to song.  Heard best as they went from “Reject Me” into “Trixx”—two great tunes played live back to back.

As the lead vocalist, Chiara is not shy, as she explains the meaning of the next tune, “Worst Kind”–a song about her ovulating and her ex-boyfriend not wanting to give her any children. Well, I guess playing the part of the coward is his loss, but at least we got a great song out of it.

Ranting about how shitty of a year 2016 has been, but not going into any details as most would, instead she did something I find to be very respectable. In place of the normal rant about politics or other hot topics, Angelicola decides to just remind everyone to be nice, nice to your neighbors and all humans because that is what we all are.  She followed this with the request for the next few minutes to forget that we are in 2016 and to transport back to 1993, a time when things were quite different.  Maybe it was for a certain name entering the White House or maybe it was hearing The Breeders smash “Cannonball” on the radio—there was a longing for nostalgia, and helping to take us there, all on stage tore into an amazing version of that iconic track.

Back to reality, we find that 2016 indeed has produced some pretty remarkable material, and to clearly highlight that the band finished the night off with their 2016 hit “Waste Away” from Volume II.

I strongly recommend getting both EP’s and catching their show the next time they are in New York.  I would also be remiss if I didn’t also recommend the tacos from the taco truck parked permanently in Union Pool‘s courtyard!