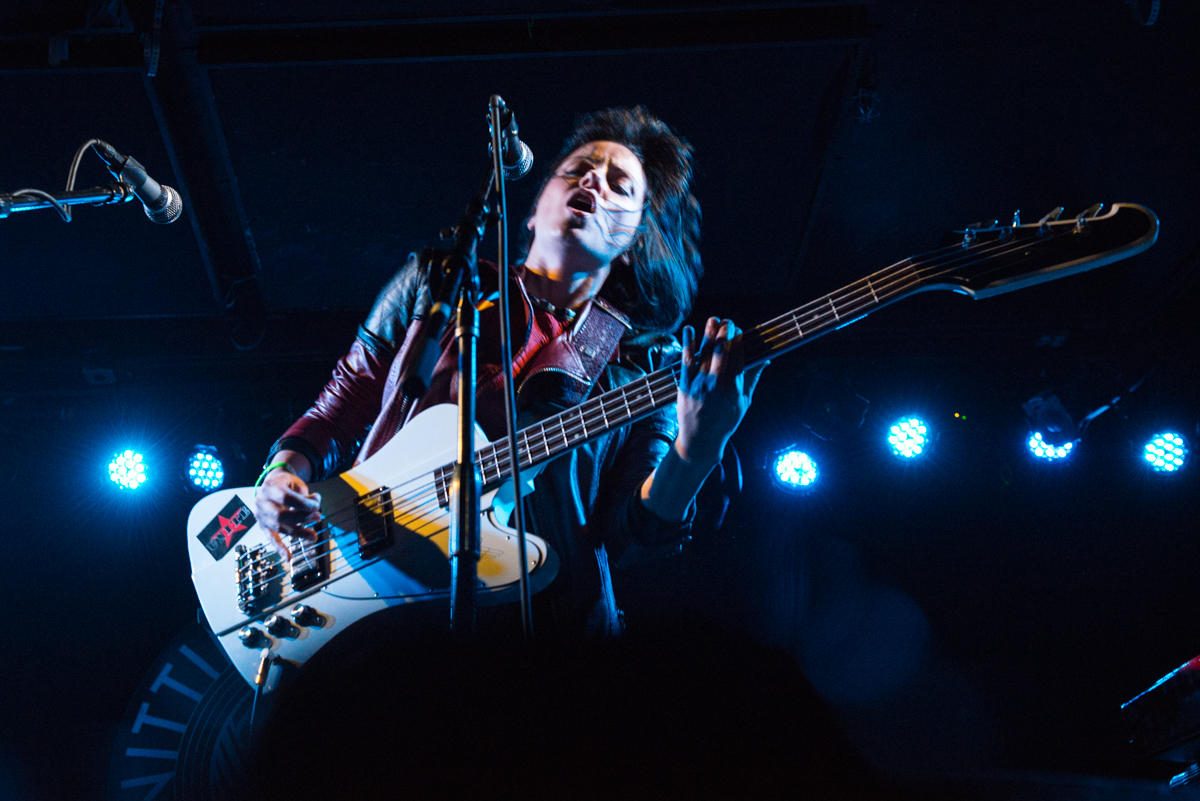 It is the closing days of November, and fans have come out in full force on a rainy night in Williamsburg-Brooklyn, braving the elements to see The Last Internationale perform a most special set at the Knitting Factory.

Dodging heavy raindrops, co-founders Edgey Pires and Delila Paz come running in from outside to greet their fans and friends, one of the few bands that pride themselves in connecting so directly with its fan base. It is so hard to imagine how these calm and collected musicians are about to put on an amazing, explosive performance mere moments later, but that is what you get from the best of the best when it comes to rock & roll.

Taking to the stage, Delila warmed up the crowd with just her acapella version of Branford Marsalis’ “Berta”. Soon she was accompanied by the crowd and then the beat of the bass drum. Edgey’s reverbing pedal effect bridged them into the next song, “Killing Fields”, from their 2014 release We Will Reign. The reverb quickly transitioned into Delila’s pounding bass riff and forceful vocals. “Killing Field” is capped off with a blazing guitar solo and leaves the crowd in astonishment at the fact that this is just the beginning of the set. The next song was more of the same high octane cadence with the percussion-soaked “Life, Liberty, and the Pursuit of Indian Blood”.

Catching her breath, Delia gave a warm welcome to their New York hometown crowd and then invited the fans to join in on the next tune, “Fire”, by singing the lyric “gotta hold that fire for you lay that burden down”. After delivering the first verse, she was soon joined vocally by the mass standing in front of her. It was at this point of the night where things really started to feel special. Perhaps it is the intimate setting of the Knitting Factory or most likely the overwhelming & welcoming feeling that The Last Internationale put out there, but we all felt as if we were a real part of the show. It is more than just their music and performance, it’s also that they have a unique way of intrinsically connecting with the crowd.

The band kept it coming by following up with the two biggest hits from their last album, both which are catchy & emotionally-rich tunes. The title track, “We Will Reign”, then followed by the anthem “Wanted Man”, where Delila once again invited us to join in, but I don’t really think anyone even needed such a request for something so natural.

The surprising highlights of the show involved the two new unreleased tracks that were performed. Following “Wanted Man”, Delila sat down behind the keyboards and started playing a new ballad called “Stay”. It was an amazing turn from the invigorating power of the previous songs to the calming effect she now held on the crowd, truly exemplifying the band’s versatile range in music. The best part was when I saw that smile come across Delila’s face at the moment she realized the audience was really embracing the new work. I imagine it can be pretty nerve-racking playing something new and not know how it will be accepted.

The second new song followed, but like a turn of the switch, they were now playing that heavy blues-rock sound which they’re so recognized for. This was clearly demonstrated in “Hard Times”, with Edgey’s incredible & riveting guitar riffs leading it off and absolutely raging “Hendrix” style solo that blew us all away, an instant rock classic even before it is released. If these new songs are a preview of what’s to come on a new record, then I am ready to place my order today.

Continuing with that raw rock and roll sound, the trio closed out the set with “1968”. Following Edgey’s rich punchy guitar solo, a brave Delila jumped out into the audience. Abandoning her mic for someone’s beer, she put her trust in the crowd as they lifted her up and carried her around. Someone then got hold of her microphone, started signing and then passing it around with chants of “Hey Hey Hey” being delivered into it with various members of the crowd– including myself. That ended with a fan literally jumping on stage with it and forcing drummer, Fernando Sanches, to also start chanting. As all of this was happening, Edgey wailed away and Delila roamed the floor greeting fans. The chanting turned to “one more” as the band left the stage before coming back out to the fans delight of one more—that being a rendition of a Howlin’ Wolf song called “Moanin’ at Midnight”,

off of New York, I Do Mind Dying”.

There’s only a limited amount of acts out there that are such great performers that I have to make a point to always go see when they come to town—one is Neil Young and the other is The Who. This is because they give every performance 110% and always give a kick-ass show. It is also not surprising that The Last Internationale have toured with both. So after seeing this show, I am adding their name to that short “must see every time” list.

2 comments on “The Last Internationale”