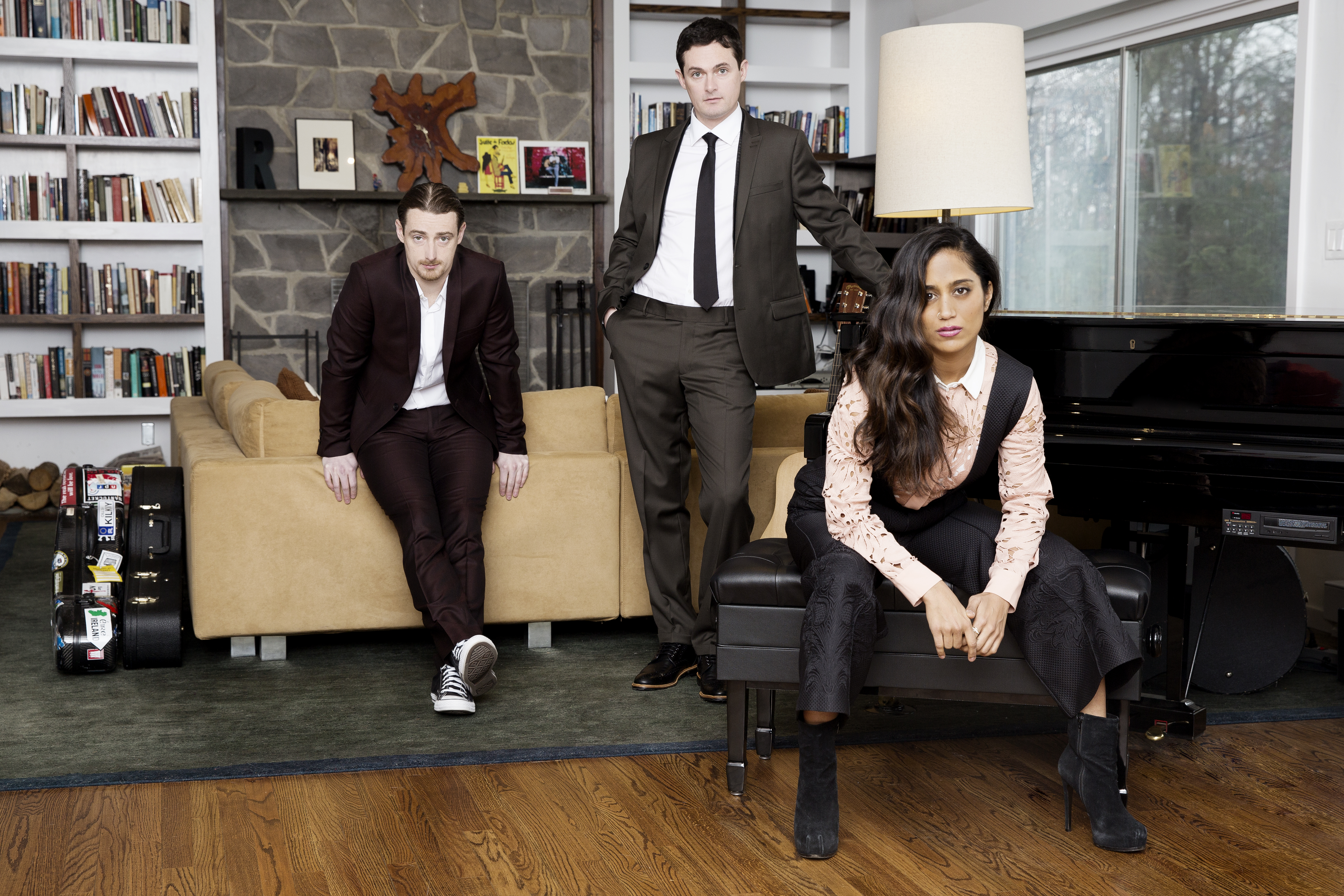 LivemusicNYC had a chance to speak with Everything Turned to Color’s Trio, Bryan Weber, Kyle Weber and Neha Jiwrajka, between their sold-out New York appearances and their West Coast tour.

Angelo:  Congrats on the new album and the two sold-out shows!  I have never seen Rockwood so crowded so early on a Friday night, usually, that takes place at 10pm. Are you surprised by this and what do you think of the fan support?

Bryan: Thanks! The fan support truly blew me away, such an outpouring of love and appreciation for this record we’ve put together. I had a little apprehension at first when we decided to perform two back-to-back sets for the preview concert – since we’ve never done something like this before, but everyone else seemed into it. In the end, after they both sold out, we actually had people coming out of the woodwork for tickets…so next time I’ll just listen to the rest of the band 🙂

Angelo:  You all spent a lot of time, I am assuming, in the studio crafting such a beautiful body of work. What were the logistics like between Bryan and Kyle managing families, and Neha constantly playing solo shows, whether it was New England tours or Superfine shows?  How did you guys all manage to write and record together and not let life get in the way?

Neha: It wasn’t easy! But I think what makes it all work is that this is a priority for all of us – we’re very passionate about this project, so despite all the life things, we had to make it happen. It helped too that Blake was so open and incredible with his schedule. He was available to us in every way, so that made the impossible task of scheduling possible.

Angelo:  We have heard some of the stuff on the new album in the past year performed live. Have you been continually tweaking or were you just concentrating on the new material?

Bryan: Well we are always writing; that’s just what we do. So while the editing/tweaking of arrangements typically happens when we first put them together as a trio or in the studio itself, we are always trying to write better songs so that the material to pull from when it’s recording time is as plentiful as possible. That’s really what we were doing over the last year and a half – writing, touring, and becoming Everything Turned To Color.

Angelo:  Kyle and Brian, I am sure working on stage with Neha is different than when you were with Zelazowa, but now your two worlds collided this weekend with Ian Sharkey taking to the stage.  How did the dynamics work out for you guys?

Kyle: Seamlessly, honestly. We did not even rehearse with Ian before sound check that night and things still felt very natural. Like riding a bike.

Bryan:  Agreed. And while taking the stage with Neha is slightly different (she lacks Ian’s beard), I’d like to think we are all relatively cooperative people. We all know that we have to work together to bring out the best in our performances.

Angelo:  Love the album cover with the two kids looking at the make-believe grown up. This can easily be interrupted in different ways, but what is the true meaning behind it?

Bryan: Some things are better left to the imagination, no? Isn’t that the Life Imagined…

Angelo:  What was it like working with the great Blake Morgan?  He must have been not only filled with tremendous direction, but with some incredible stories. What did you take away from such an experience?

Neha: This was my first time working with a producer. When I recorded my solo album, I did everything myself. Now that I have had the pleasure of working with someone who can give high-level direction on all fronts, I’ll never go back! I am always asking Blake Morgan to be my producer whenever I or we record again!

Blake is a visionary. He is so thoughtful, and one of the things I like the most about the way in which he works is that there is a purpose to every decision he makes. If he believes something should sound a certain way, or a certain instrument should be used, or I should sing the take again with a different point of view, he has very thoughtful and intelligent reasons for as to why. That’s how I know, OK, there’s something behind this decision or thought process. Blake spent so much time with us etching out the high-level point of view of this record, creating a ‘mood’ board of words and phrases that sum up how we feel about the music. He then kept these words and phrases at reach and referenced them every time we were in the studio to make sure we were coming back to our focus and goals. He was able to help us achieve the vision we had, and also take it so much further than we had imagined.

He’s also just so much fun to work with. He has incredible stories to tell from his life as an artist, and he is so passionate about the work he does both as a songwriter and artist and as an advocate. I felt like I always learned something from him every time I went to the studio, and I also had great laughs every time I was there! It really was a very special experience for me to be able to work on this record and have Blake produce it.

Angelo:  “Something to Live For” is such an outstanding song, and is no doubt one of the special things to come from this LP— just that first verse alone is amazing.  What was the inspiration?

Bryan: Thank you! That song actually grew out of an old tune that I wrote years ago called “Fallen From Ether”. It never really felt right until about a year ago when I came up with the chorus part and added the finger picking. When I brought it to the group everyone added their own musical signature of sorts and took it to where it is today – that’s the benefit of working in a group like this. On the record too, Blake came up with that four to the floor kick idea which truly escalated the song to another level.

Angelo:  House Concerts  ( like www.indieonthemove.com ),  this is once again a very innovating concept from you guys.  How is it shaping up?  Where do you plan on taking this?

Kyle: We have been fortunate enough to have some very supportive people invite us to perform house concerts as of late – San Jose, CA and Rhinebeck, NY being two of them. It is a great concept really, and typically more lucrative for artists with less overhead. But a lot of times the host needs to already be a fan of what you do to open their house up and invite you to perform for their friends. So my suggestion to bands is – get out there, play live, and make some fans. You never know where that will lead.

Angelo:  So just as the weather is turning in New York, you guys are off to California for a bit of a West Coast tour. What are the highlights, (venues, cities, and people)  you are looking forward to out there?

Neha: This is the band’s first tour, so I’m really excited to see how we grow over the course of the next week and a half as a musical entity by playing back to back shows for an extended period of time.

Additionally, most of my family is in India, but of the family that is in the US…they all live in LA. So for me, besides going out to the west coast to play music (which is a highlight in itself!) I’m excited to play in front of my family for the first time. They have no idea what to expect, so I’m hoping they walk away really excited about the music, and obviously with some CDs in hand! I also spent 5 years in SF working for Google so a bunch of friends and old colleagues will be at our show in San Francisco. That is also special to me because I left my job at Google to pursue my music career, and now it’s all coming full circle.

I’m also excited to work on my tan…

Angelo:   The next time we get to see you perform back in New York will not be until June at the “A Taste of Brooklyn American Music Festival”. What can we look forward to this event?  Will it be a full show?  Can we expect any special guests?

Bryan: I am very much looking forward to that show. Aside from being right in our neighborhood, the whole event is organized by a close friend of ours, Jan Bell, and all ages are welcome. Jan will be releasing a new record and has invited some of her close friends to join her under the archway in musical celebration. Most likely it’ll just be the three of us on stage that evening, but you never know. I would anticipate

some new songs in the setlist … and some warmer weather.

Angelo:   One word to sum up the new album?

Kyle: Solution (like in science) – a mixture of multiple substances that are uniformly distributed throughout the final product.